If you haven’t gotten your fill of food trips over the holiday break, the good news is that you won’t need to leave the metro to get a taste of the best of Filipino food.

SilverSpoon Kitchenette is launching its 2023 Travel Lokal Campaign which highlights dishes that represent regional culinary traditions every quarter of the year.

“SilverSpoon’s mission is to give a spoonful experience to our customers – part of which is to bring something new to the table,” shares owner Decie Montefrio. “That’s why we decided to immerse ourselves and travel to places to understand to understand the culture and tradition of our local dishes and to give homage to our own cuisines.”

From January 6 to April 5, 2023, Pinoy food lovers will be able to enjoy a well-curated selection of Kapampangan dishes.

Pampanga’s culinary heritage is heavily influenced by Spanish cuisine (by way of the Spanish friars and sailors who introduced their way of cooking to the locals during the Spanish occupation), while also sharing characteristics with Malay and Mexican cuisines. Kapampangan cooks also incorporated local produce into the resulting dishes, and pioneered in methods of pre-cooking (“sangkutsa”) and food preservation, earning for their region the moniker “culinary capital of Luzon.”

SilverSpoon’s limited edition menu is a product of extensive research by the SilverSpoon team, made by traveling to Pampanga collaborating with a local homecook who shared heritage recipes and provided insights into Kapampangan cuisine. This menu includes:

Suam na Mais. Also known as sinabawang mais, this is a healthy and hearty soup made from white and yellow corn kernels.

Pork Sisig. The famous Kapampangan dish made with pig’s face (“maskara”), belly and chicken liver, seasoned with calamansi, onions and local chilis. Traditionally, this dish does not include the mayonnaise and pork cracklings (“chicharon”) that figure prominently in the version present in many Metro Manila restaurants.

Bringhe. Also known as biringhi, it is the local version of the Valencia paella, but uses local glutinous rice (“malagkit”) cooked in coconut milk (“gata”) and turmeric which gives the dish its distinct flavor and color. Giving more heft to the dish are the bits of chicken , chorizo and vegetables that are cooked along with the rice.

Palitaw. Popular local rice cake dessert made with glutinous rice that was washed, soaked and ground then shaped into flat discs and cooked in boiling water. The dish gets its name from the way that the palitaw floats to the surface to indicate that it’s done. It is then topped with grated mature coconut (“niyog”) and served with toasted sesame seeds, muscovado and washed sugar.

Drinks. To complement the meal, SilverSpoon serves various beverage options which include hot and iced chocolate, as well as mocktails such as Blue Lagoon (citrusy drink made with blue curacao syrup) and Shirley Temple (made with ginger ale sweetened with grenadine and garnished with a maraschino cherry).

So if you feel like going back to our culinary roots and delving into our heritage cuisines, drop by SilverSpoon Kitchenette and take advantage of its Travel Lokal offerings.

Watch out for other local cuisines to be featured later in the year! 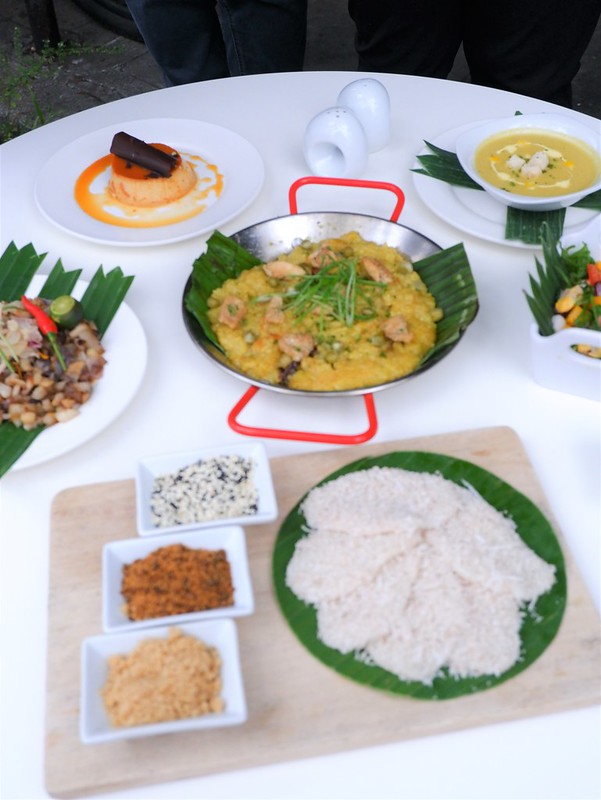 Silverspoon Kitchenette is located at 81 Scout Gandia Street, Barangay Laging Handa, Quezon City, open daily for dine-in, takeout or delivery from 11am to 10pm. For inquiries, reservations or delivery orders, call +63 917 1603327. It also delivers via GrabFood and FoodPanda.

Plus, here’s a special treat for your food trip!

Scan this code and present your boarding pass when you dine in at SilverSpoon to enjoy 10% off on your bill! (Applicable top dine-in transactions only)

Disclosure: I attended a food-tasting event held at this restaurant. Food items mentioned here were served to facilitate an honest review and were not paid for by the attendees.

Check out my previous posts about SilverSpoon: