Salamangka translates to “sleight of hand” in Tagalog. It is a word wrapped in magic and mystery, calling to mind enchantment and wonder.

The restaurant and bar in Eastwood Citywalk that bears that name lives up to it by offering coffee, cocktails and craft beer, as well as its own reimagining of Filipino food, against a welcoming backdrop laden with a hefty dose of mystical appeal. 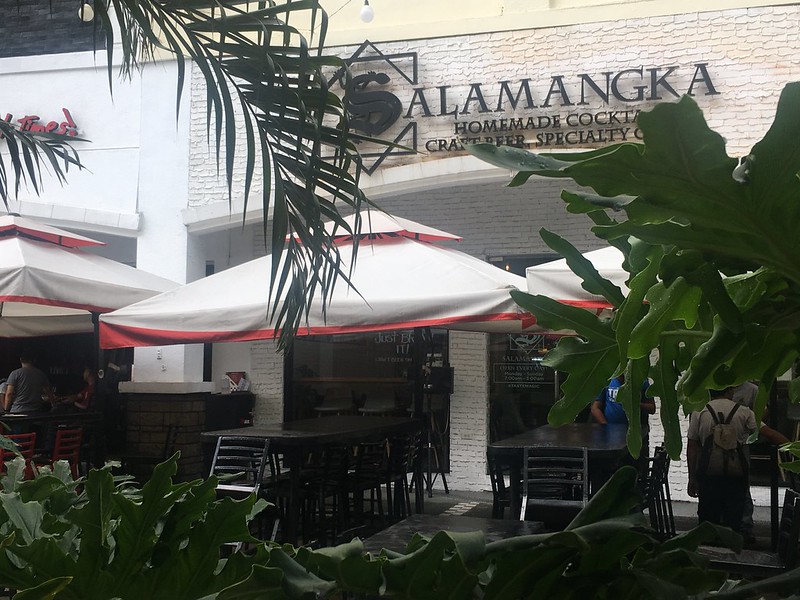 Together with my foodie friends from #WeLoveToEatPH and #SaanSaPH, I stepped inside Salamangka’s doors for a taste of magic.

In the late morning, Salamangka is awash with light, the black murals of mythical creatures and the balete tree on the wall wonderfully offset by the clean white background. Furniture made with native materials and a huge table and bench set made from solid pieces of wood provide ample seating for the diners. 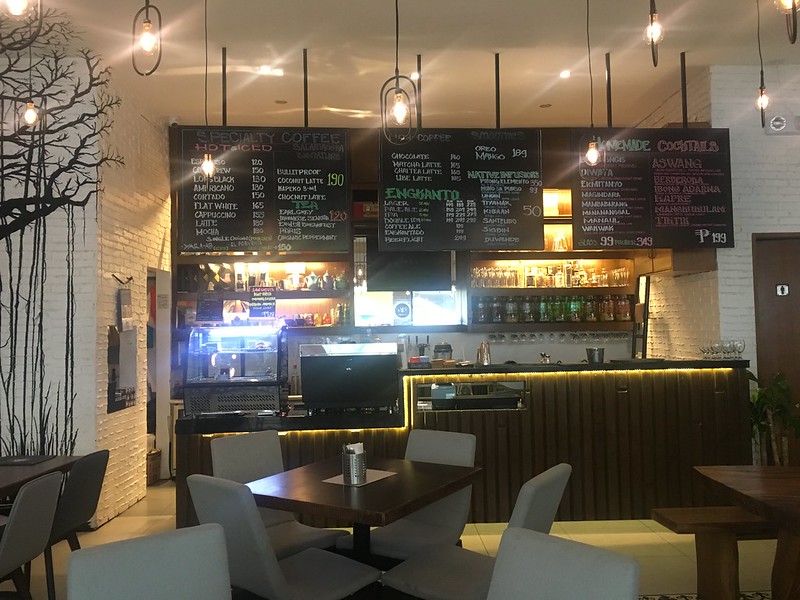 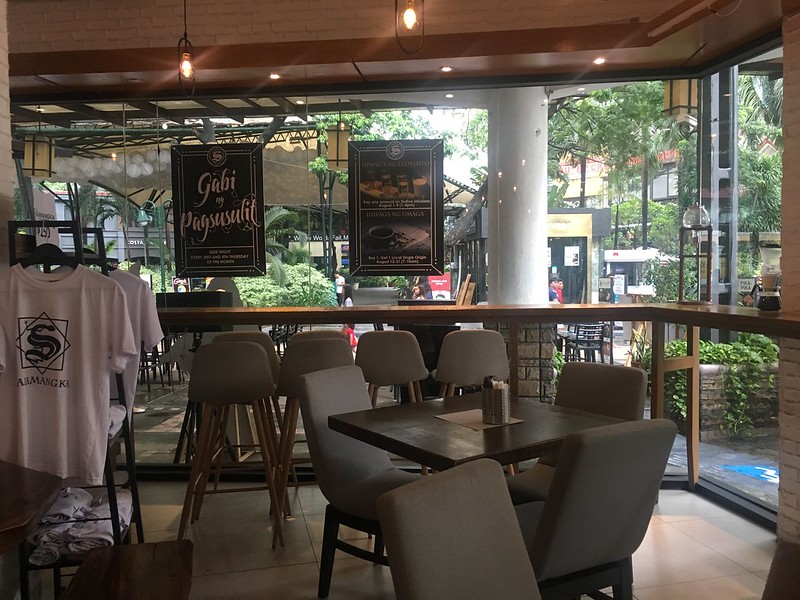 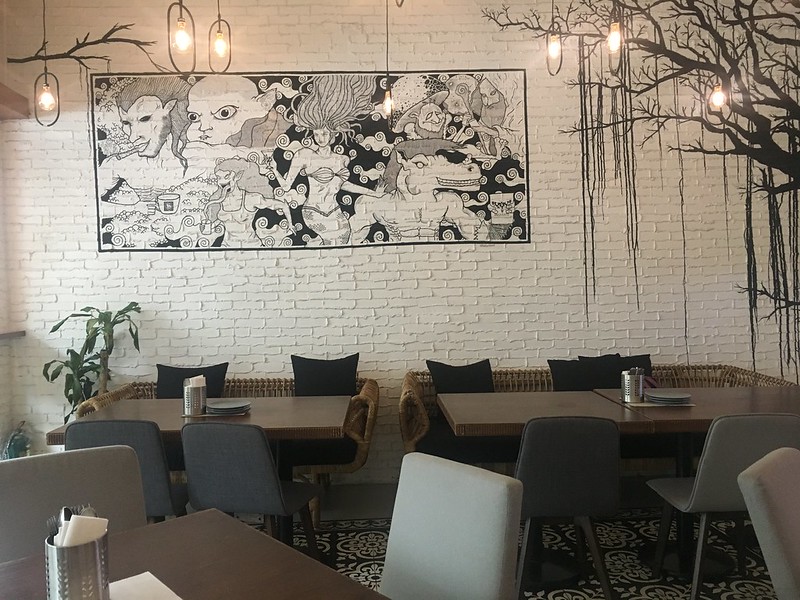 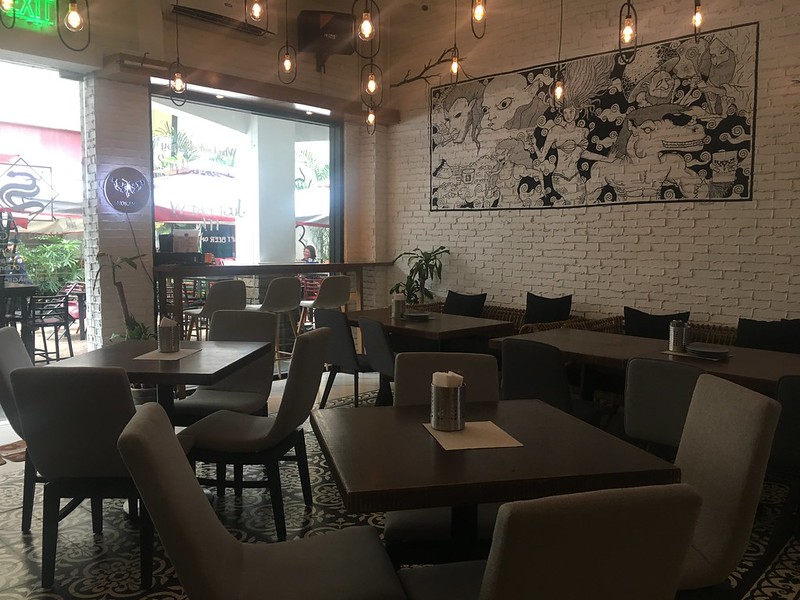 Salamangka’s menu consists of its own take of classic Filipino dishes, such as:

Kamote Chips (Php199). Crispy deep-fried slices of of sweet potatoes that go so well with its dip of condensed milk reduction. 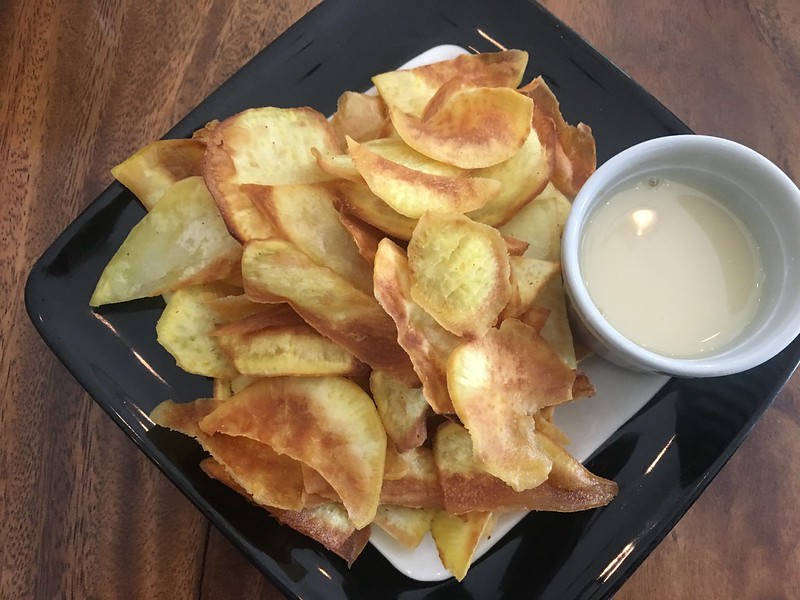 Piknik (Php199). Crispy hand-cut potato slivers served with three different sauces (but they’re ok without the sauce as evidenced by the way I keep popping them into my mouth, hehehe!) 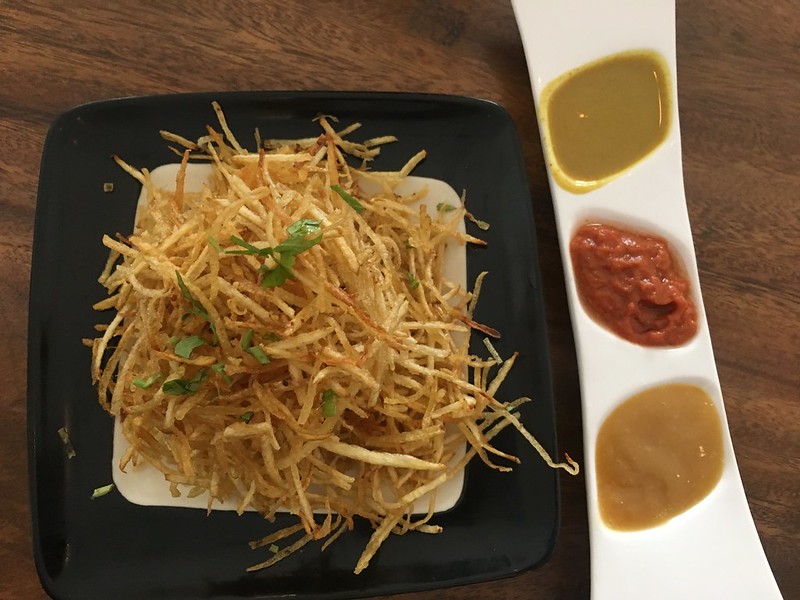 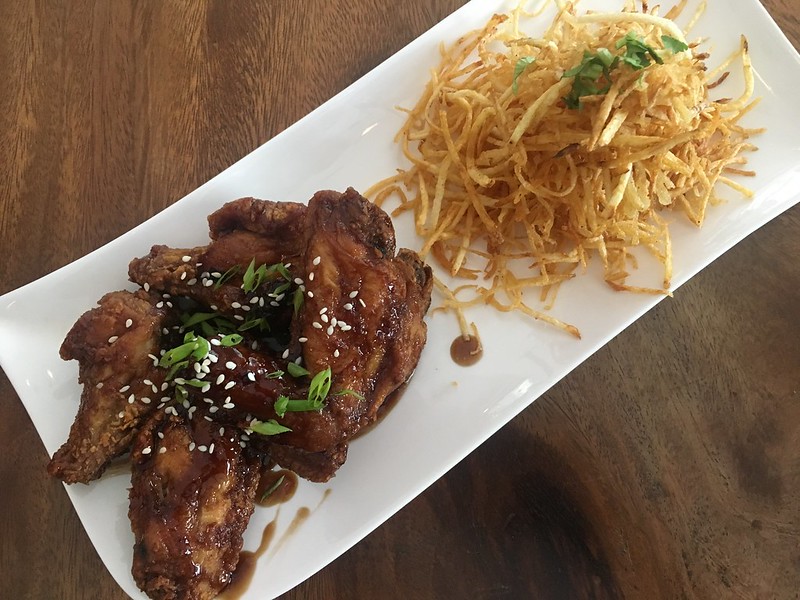 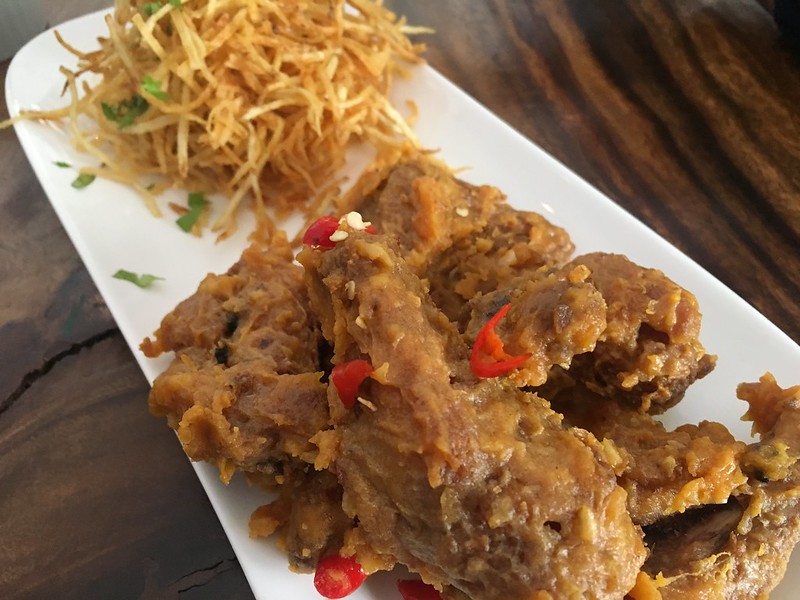 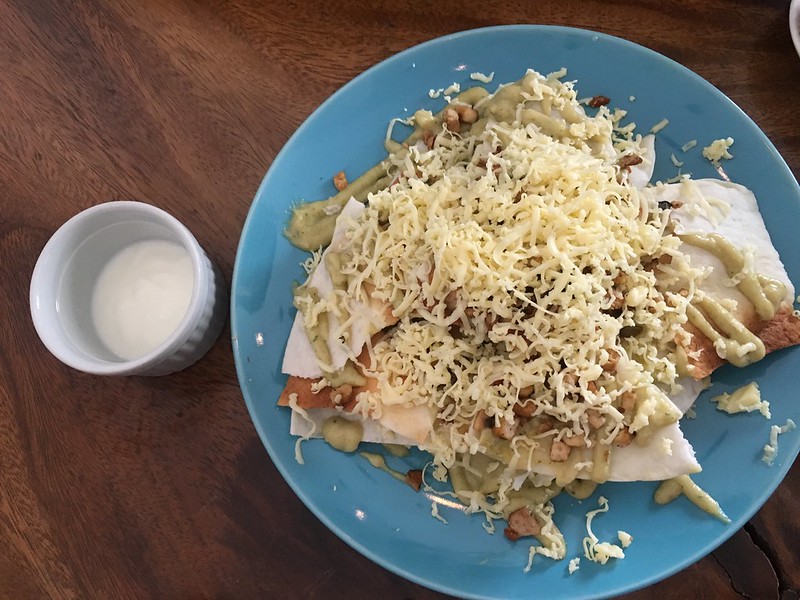 Tinapa (Php189). A bowl of smokey tinapa flakes on top of garlic rice and paired with salted egg, a side of tomatoes and burong mangga. 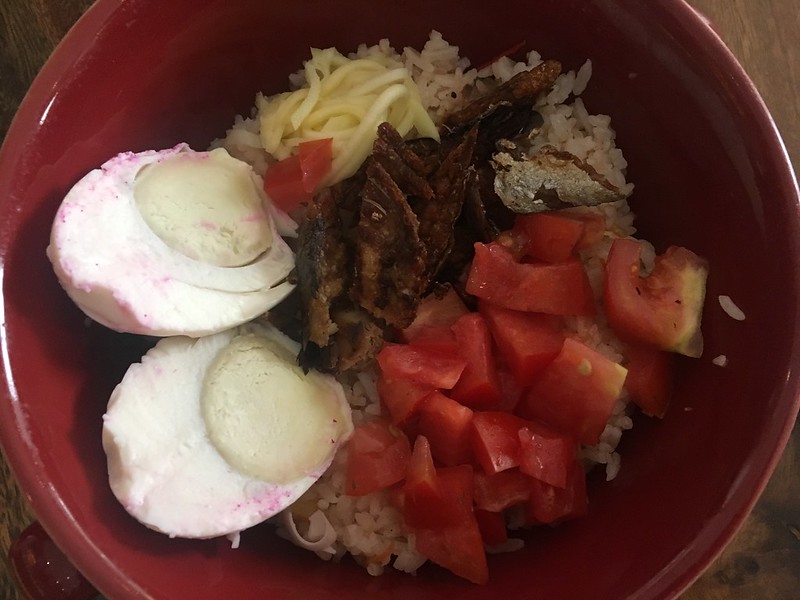 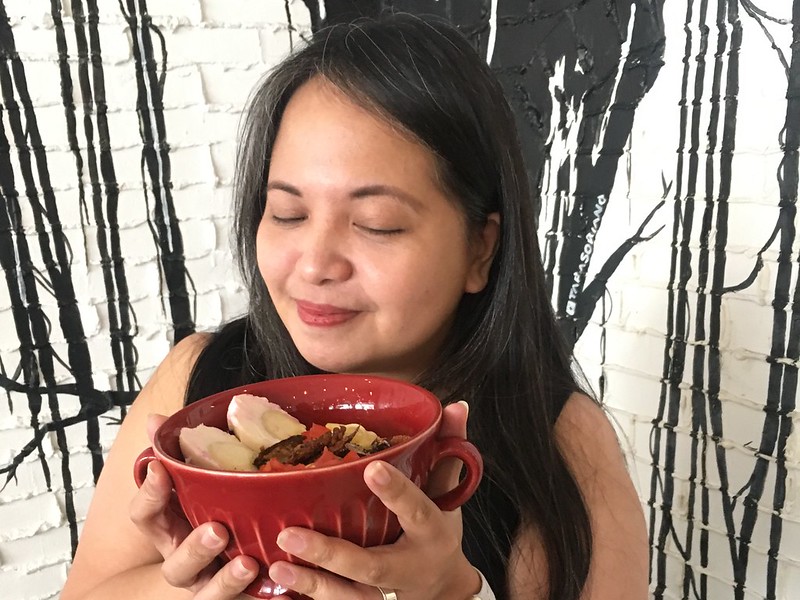 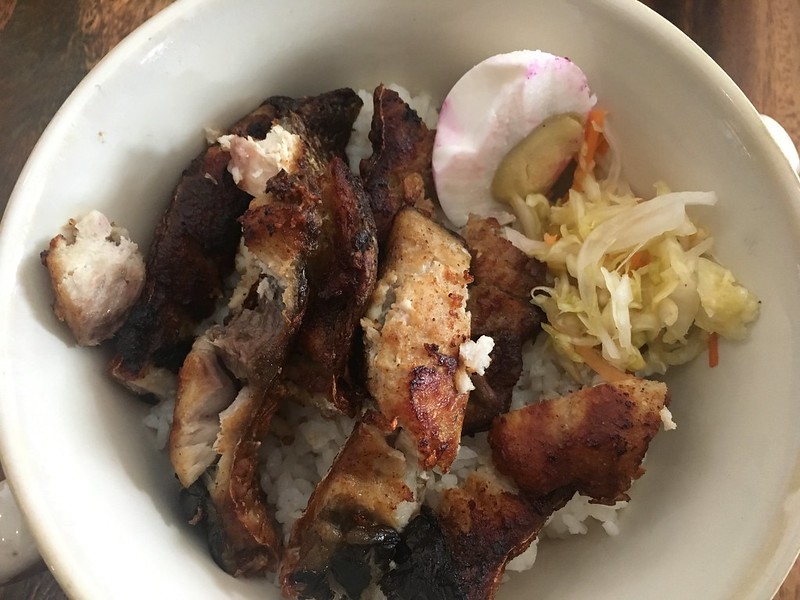 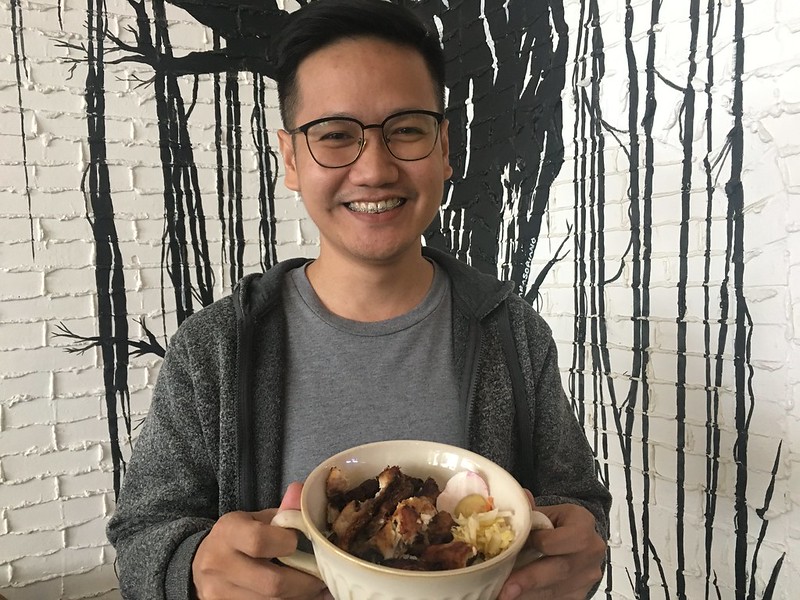 Sinigang sa Manggang Hilaw (Php279). Beef sinigang with a sour sauce instead of broth on top of steamed rice and served with sour mango and bagoong. 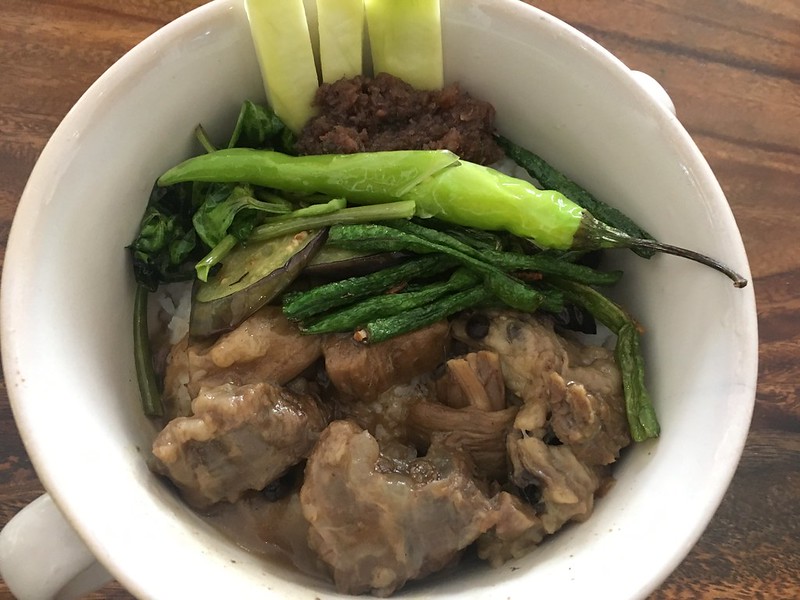 Once you’ve eaten your fill, how about lettin’ loose and sampling Salamangka’s much celebrated alcholic concoctions? Impress your friends with your knowledge of native folklore when you identify the entities that give their name to these intense spirits. 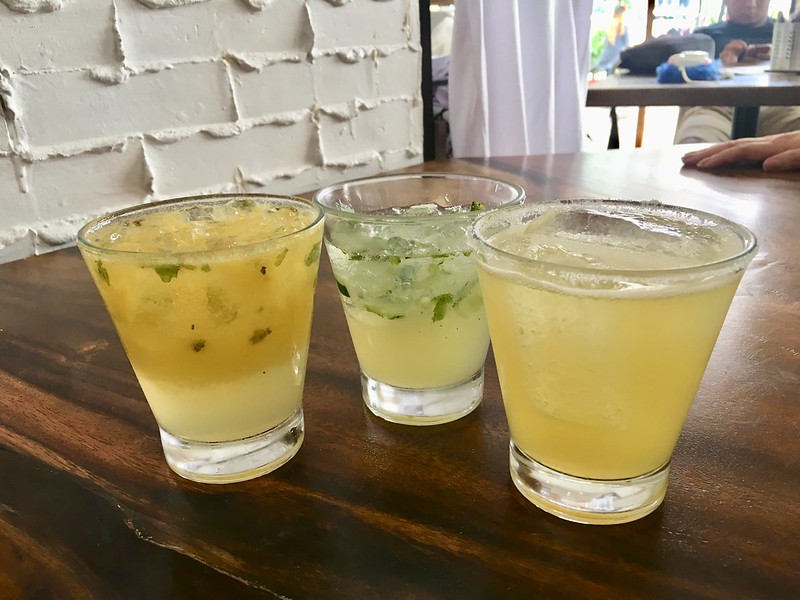 Wakwak (Php99 per glass | Php349 per pitcher). Named after a vampiric bird-like creature that makes the noise “wak-wak” as it flaps its wings, this cocktail is mixture of rum, lime juice, mango puree and mint leaves.

Mambabarang (Php99 per glass | Php349 per pitcher). Made with gin, lime juice, cucumber slices and mint leaves, this cocktail got its name from the warlock or sorceress that cast malevolent hexes on people

Ibong Adarna (Php99 per glass | Php349 per pitcher). Named after the mythical bird whose song has healing qualities, this drink is made with tequila, pineapple, calamansi and chili placed in a salt-rimmed glass. A sip of this drink is multi-layered: you get the citrus flavor from the calamansi, the spiciness from the chili, the saltiness from the rimmed glass and the fire of the tequila as it travels down your throat.

What really got me excited was Pitong Elemento (Php350). A flight of seven intense native infusions inspired by legendary elementals, this consists of seven shot glasses of flavored spirits that pack quite a punch.

You can also opt to get these infusions individually by the shot glass at Php50 each, except for Nuno sa Punso which is at Php99. 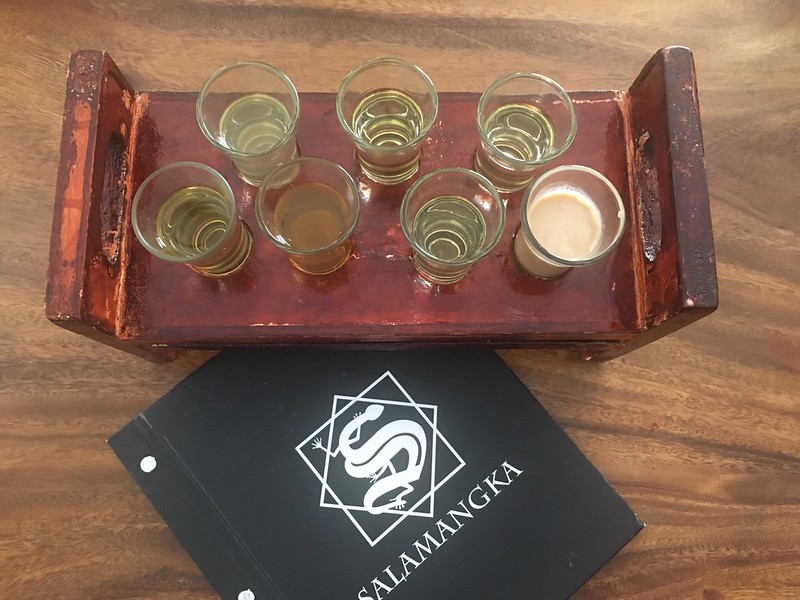 (Note: I only attempted to try Nuno sa Punso and, really, a few sips were more than enough for a lightweight like me.) 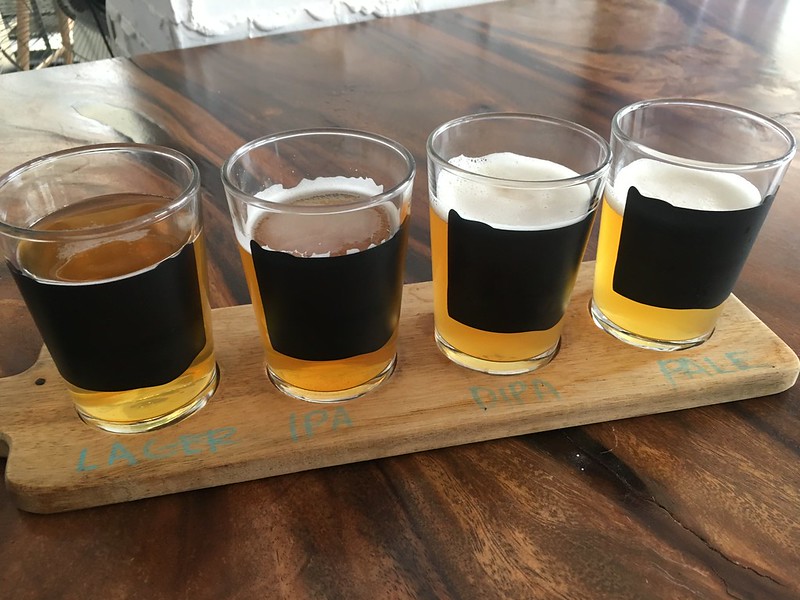 Salamangka also prides itself on its Single Origin local coffees at Php99/cup such as those from Bukidnon and Batangas. These are freshly ground upon order and then brewed using pour over cups. Until August 31, get a Buy 1 Get 1 deal on these local coffees from 7am to 10am, thanks to Salamangka’s ongoing Hiwaga ng Umaga promo. 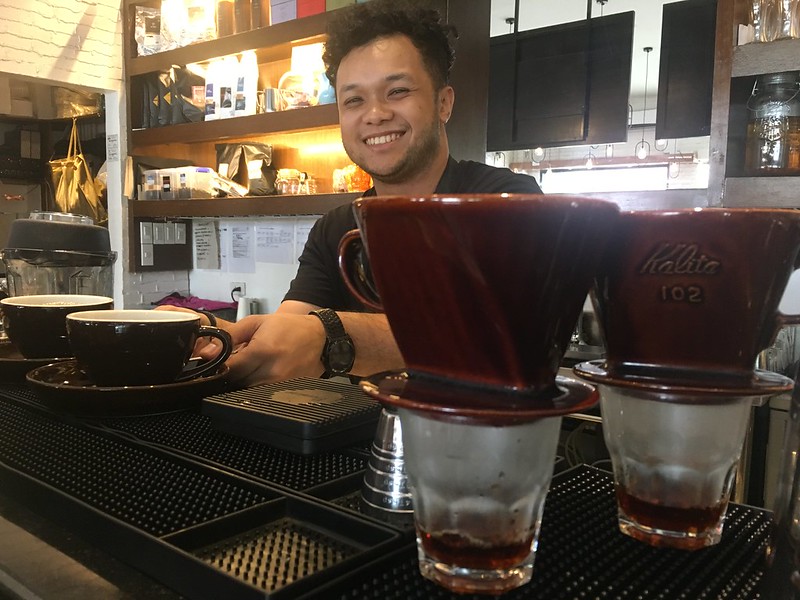 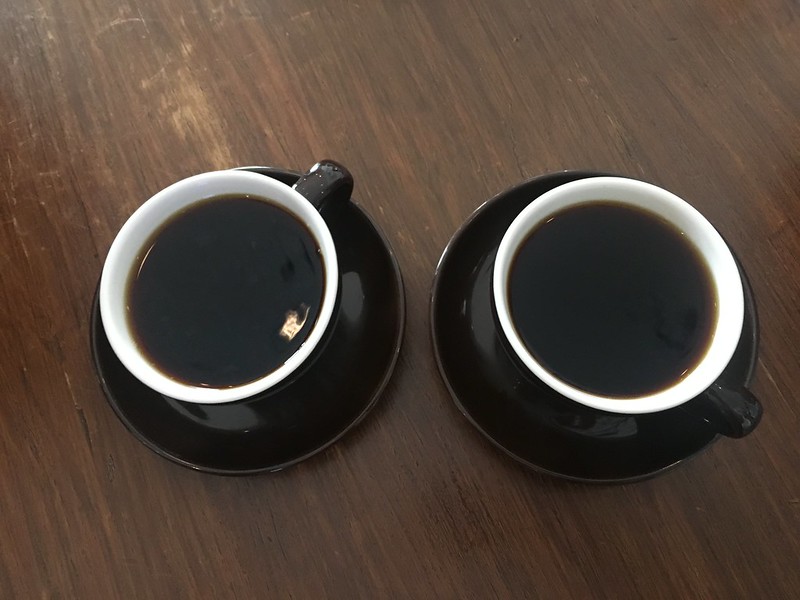 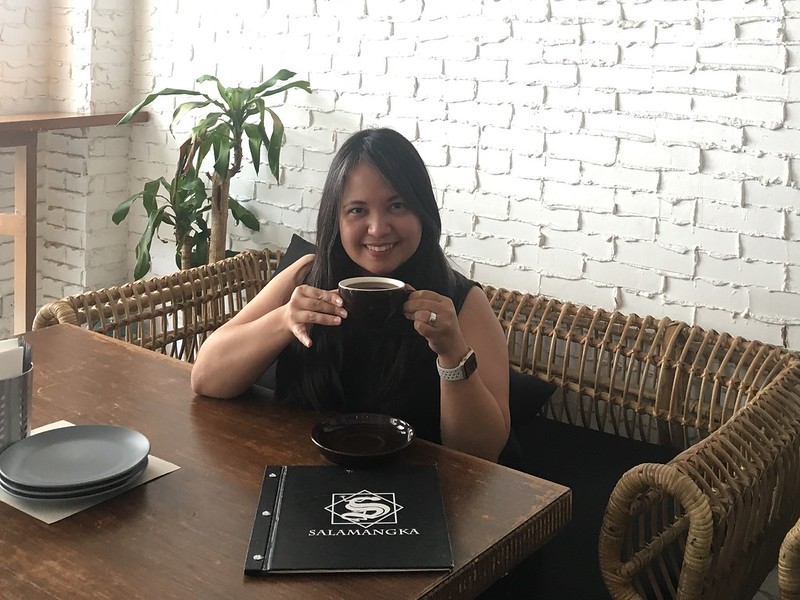 Salamangka’s Bulletproof Coffee (Php190), which is made with brewed coffee, coconut oil and unsalted butter, would probably be great for chasing away a hangover given the coffee’s touted properties for enhancing alertness. I would just prefer the residual flavor from the coconut oil to be tempered down a little bit more so that the creaminess and the slight sweetness from the butter would be more pronounced. 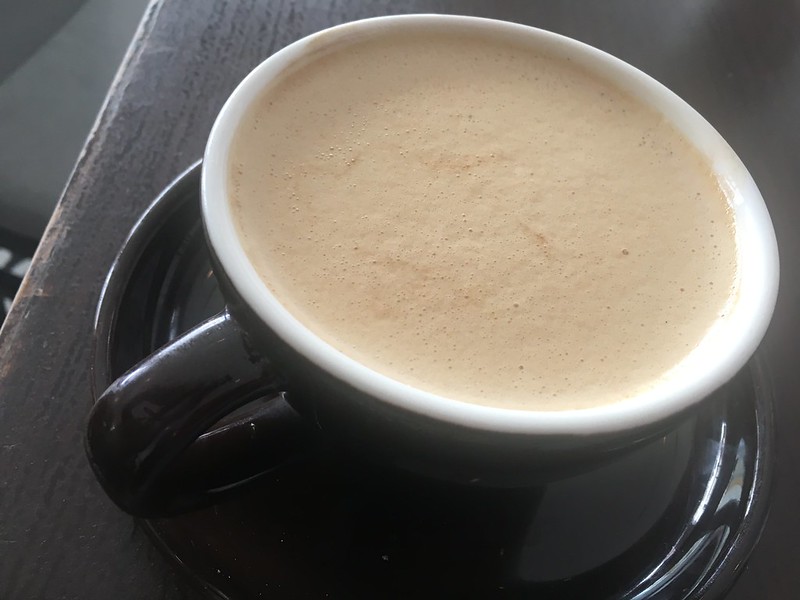 So if you want a great time with your friends tinged with magic and mystery, head on to Salamangka. 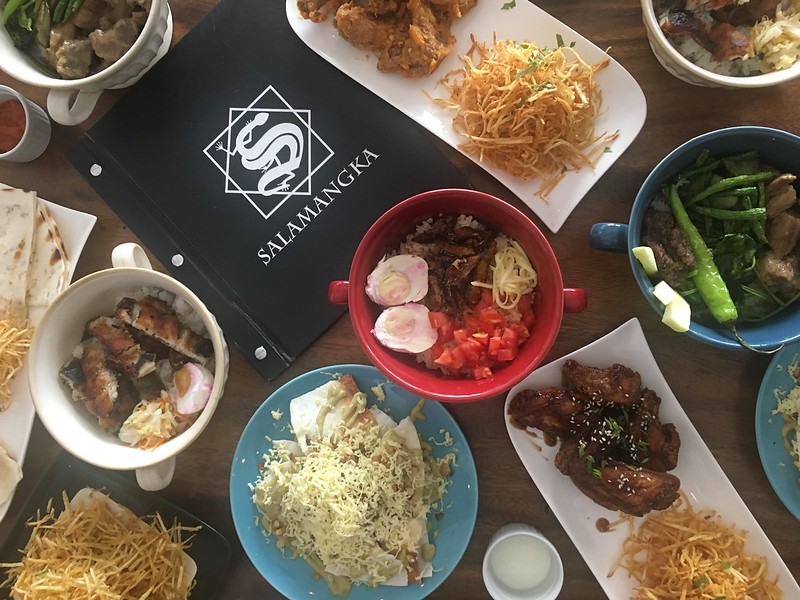 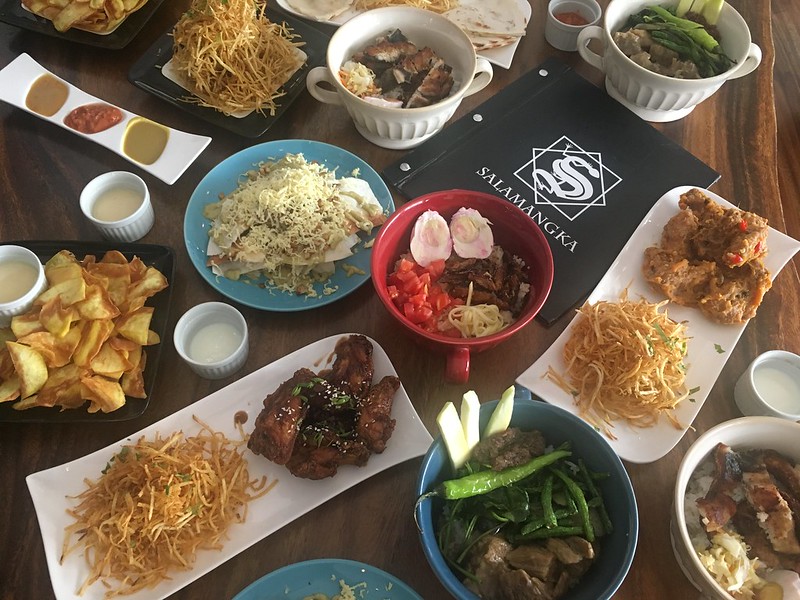 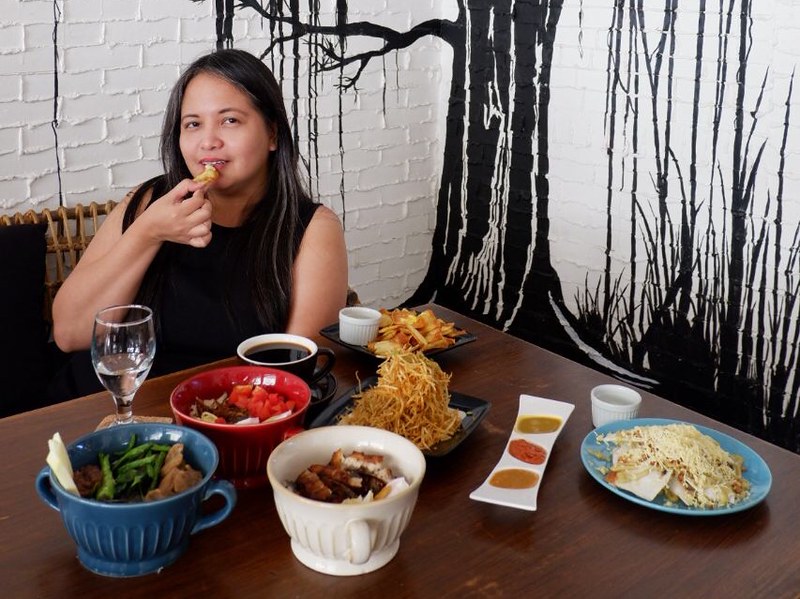 Thanks to Darryl, Issa, Veni and Kevin of Salamangka for having us! 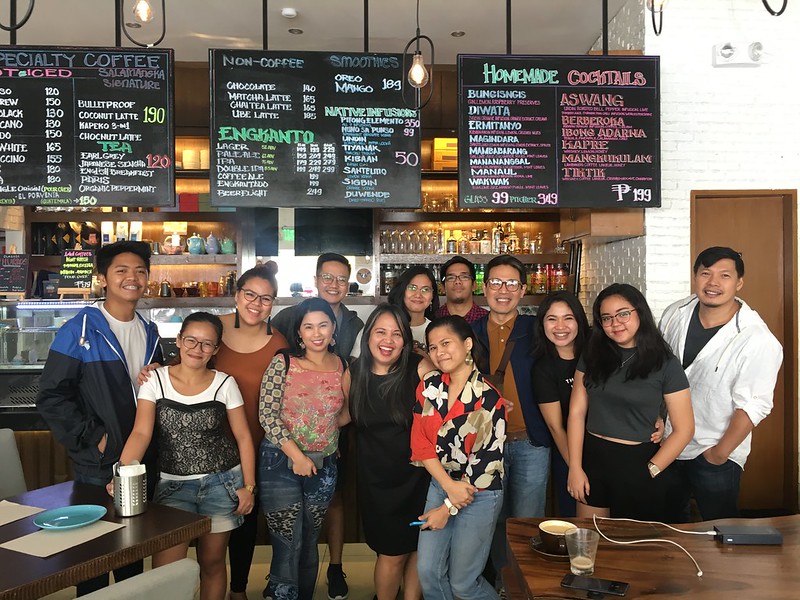 Join Salamangka’s Hocus Focus Facebook contest by posting a picture of you posing in one of Salamanka’s Kreature Kutouts. Make sure your post is public, tag @salamangkamnl, use the hashtags #IsangTaongHiwaga and #TasteMagic, for a chance to get a freebie. 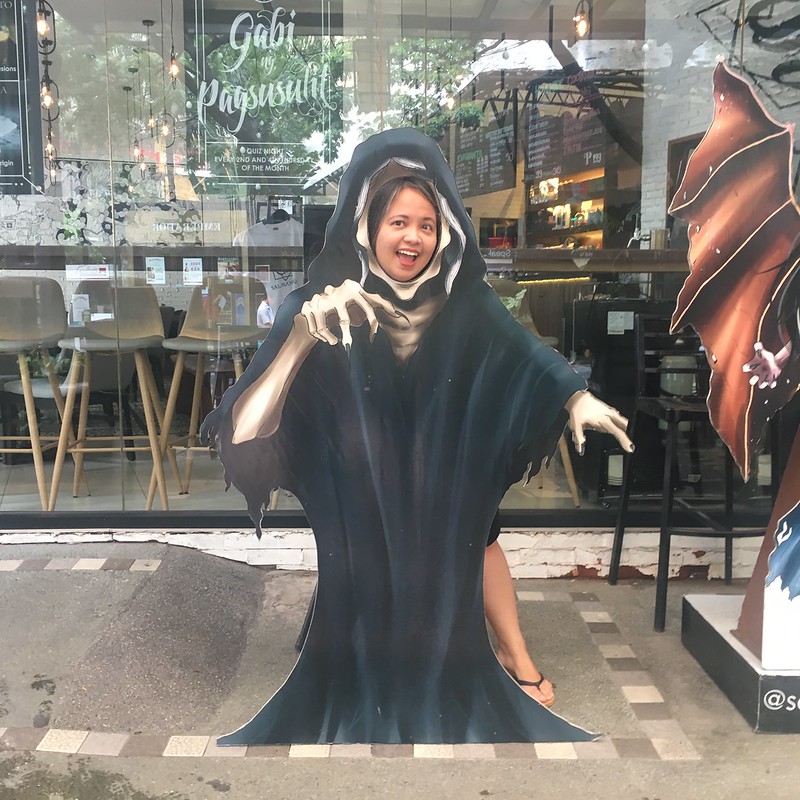 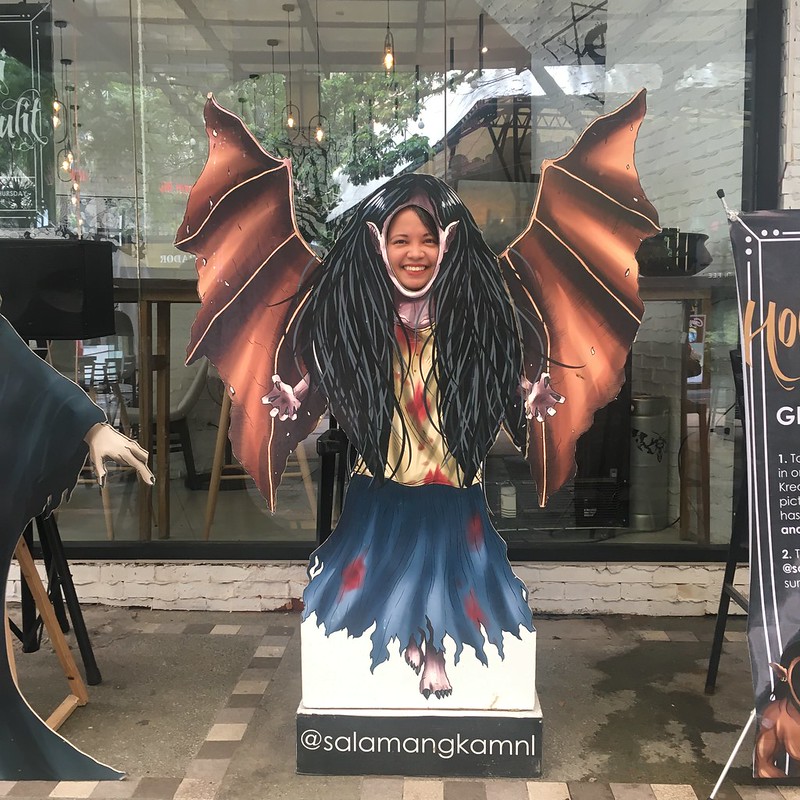 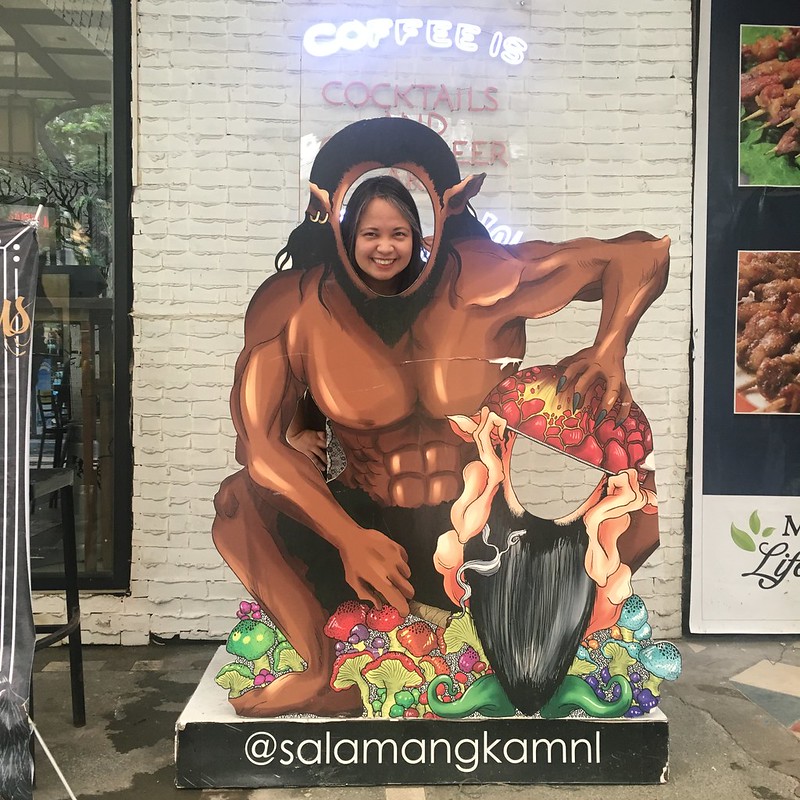 Feel like pitting your knowledge against other Salamangka guests? Join the Gabi ng Pagsusulit, a quiz night held at Salamangka every second and fourth Thursday of the month.

Salamangka is located at Eastwood Citywalk 1, Libis, Quezon City, open daily from 7am to 3am. For inquiries and reservations, call +63 2 5518557.

Did you know you can buy two drinks and get the same two drinks for free at Salamangka through Zomato Gold? Zomato Gold provides members with 1+1 deals on food or 2+2 deals on drinks. All you have to do is sign up for a Zomato Gold membership here. Use my code JELLYB to get 20% off the membership fee.

Disclosure: Together with my fellow foodies, I was invited to join a foodie meetup held at this restaurant. Food items mentioned here were served to allow us to sample the fare and were not paid for by the attendees, including myself.