We usually associate the strong and astringent whiskeys to Scotland where the traditions of brewing and distilling of this spirit were said to be first established. The name whiskey, in fact, was derived from the Gaelic word uisce.

However, the folks at Westland Distillery are advocating a new category of single malt whiskies: that which is home-grown in the Pacific Northwest. While still honoring the same core ingredients – barley and water, and the same time-tested equipment and processes, Westland Distillery produces outstanding whiskies that are defined by its environs: whiskies that are truly American.

It turns out that the Pacific Northwest’s area and climate are ideally suited to the production of single malt whiskey. For one thing, Washington State covers two of the world’s best barley-growing regions, and water from the Cascade Mountains provide the water.

During the fam’s visit to Washington State, Hubby and I were treated by my bro to a whiskey tasting event at Westland Distillery’s Cantilever Room, where we enjoyed the rustic atmosphere along with the distillery’s signature whiskies. 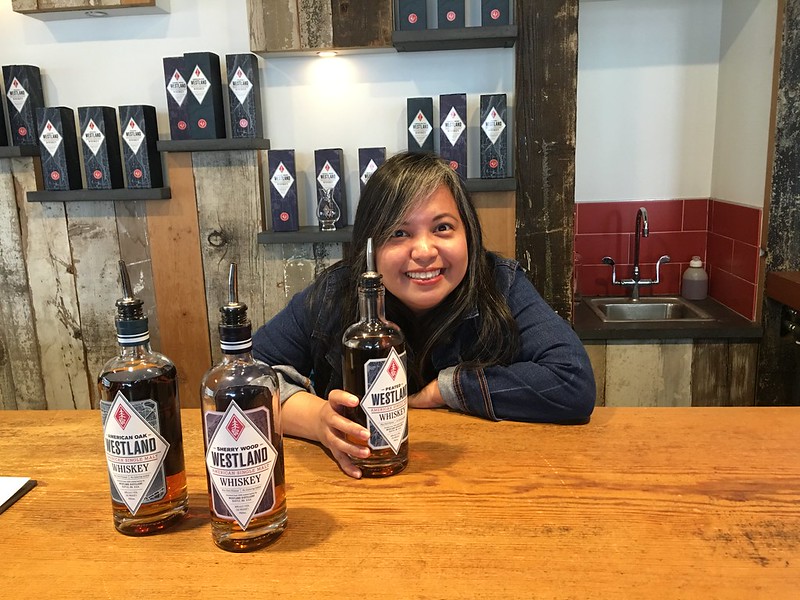 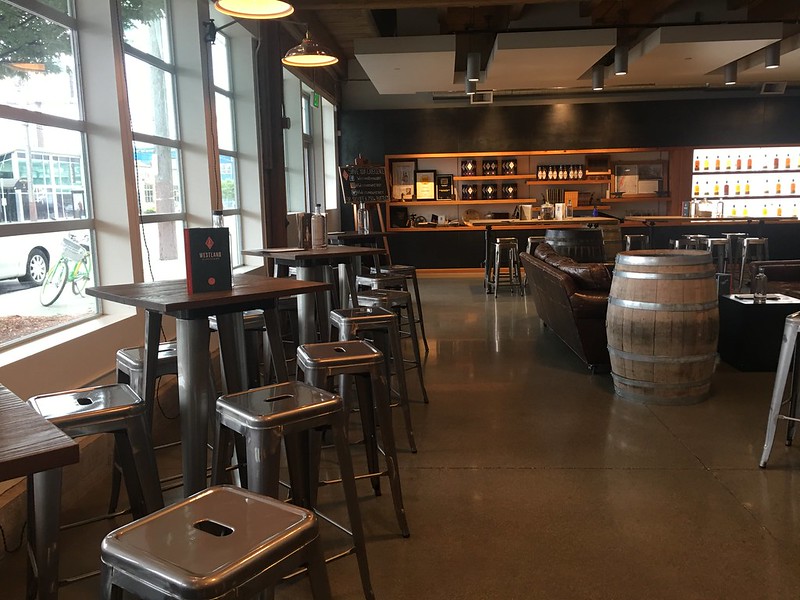 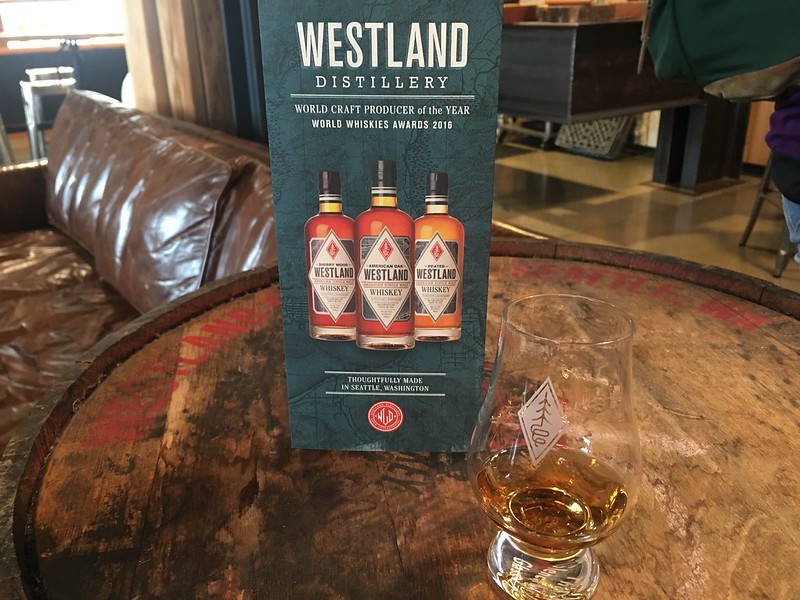 Before the whiskey tasting, we were given a tour of the production floor where we learned the science and artistry that goes into making a very American single malt whiskey. 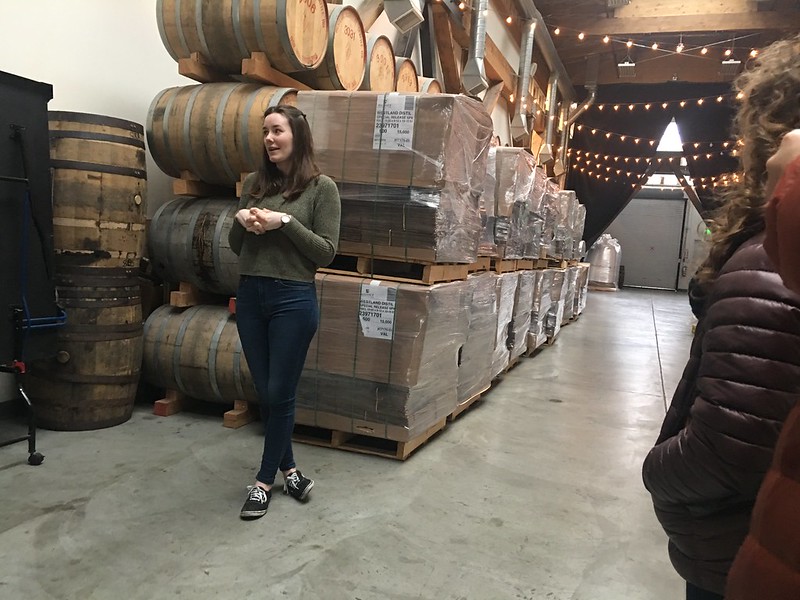 Whiskey production starts with barley which form part of local farms’ crop rotation practices, thereby further enriching the soil.  These grains are then malted (soaked in water to allow to germinate to release enzymes then quickly dried through a kiln or peat smoking) to achieve five malt flavors that Westland Distillery mixes together according to their ratios or recipes called grain bills: the Washington Pale Malt, the Munich Malt, the Extra Special Malt, the Pale Chocolate Malt and the Brown Malt.  The Peated Malt factors into the Peated whiskey that the distillery produces. 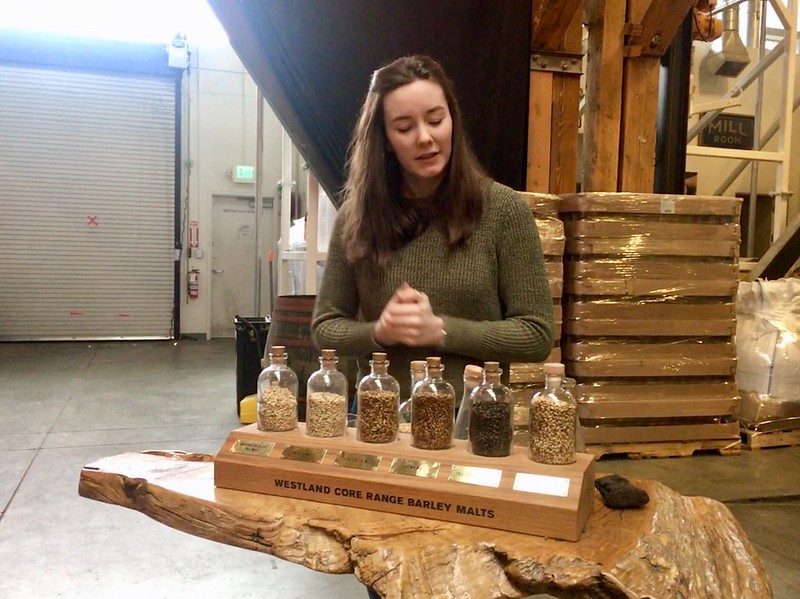 The grains are taken to the mill room for mashing wherein they are combined with water and allowed to ferment to produce wort, which contains sugars that will then be mixed yeast to produce alcohol.  Westland Distillery uses Belgian yeast which adds a floral flavor to the brew. 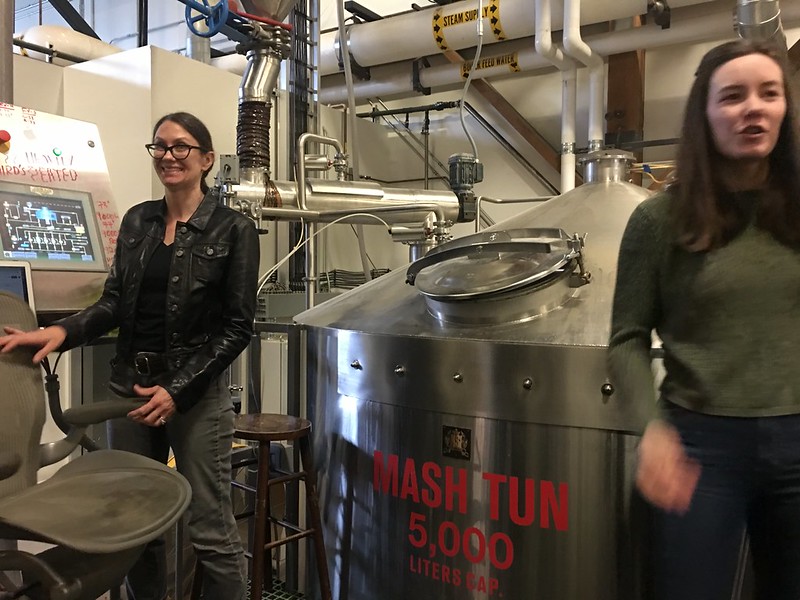 In the still room, the brew is distilled first in the onion-shaped copper wash still, then in the spirit still to concentrate and isolate the alcohol. 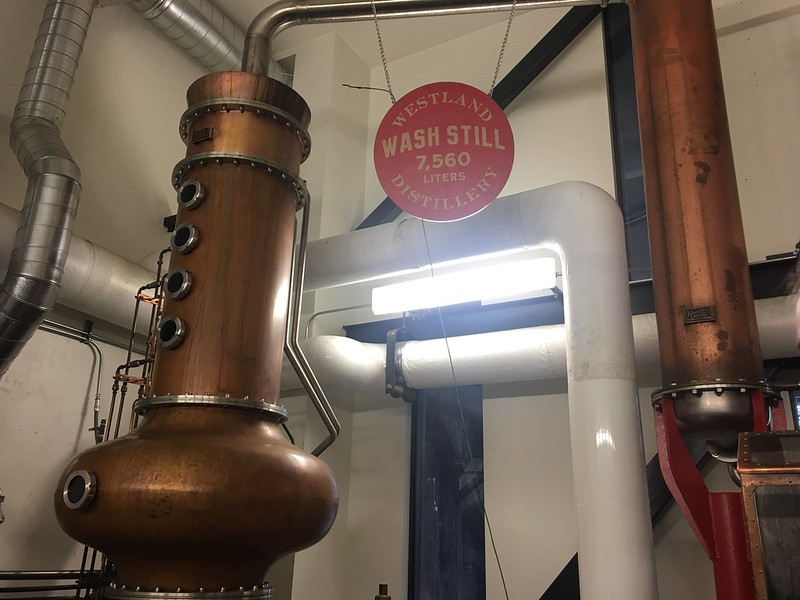 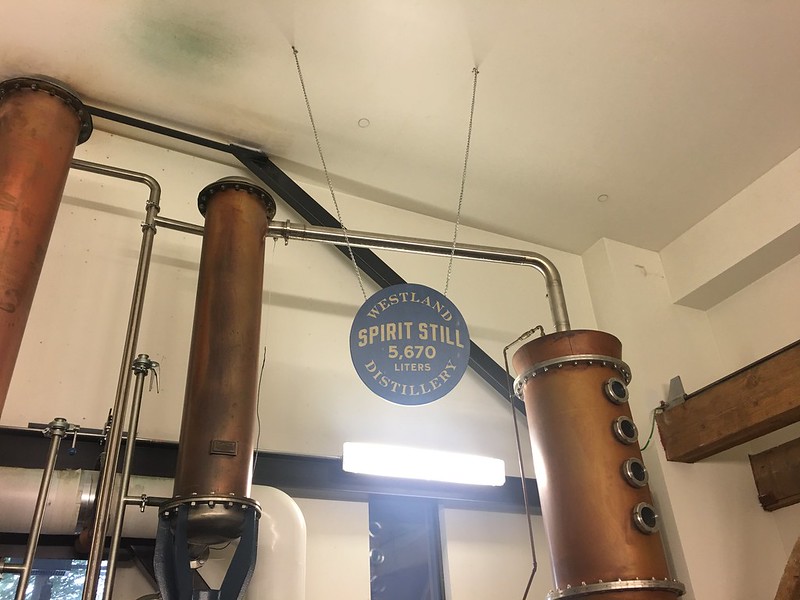 The distillation process also cuts the brew into heads, hearts and tails.  The heads are mostly made up of volatile alcohols which are disposed of as these should not be consumed. The hearts, on the other hand, contain most the rich flavors of what goes into the whiskey, while the tails contain the more bitter and musty portions which are also disposed of. 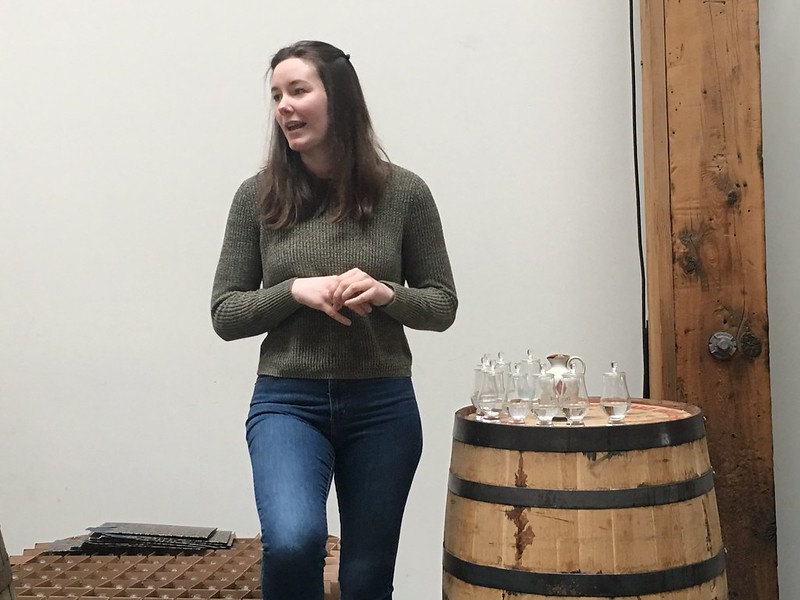 Distilled alcohol is actually clear: the amber color that we associate with whiskey comes from the charred oak barrels used where the alcohol is allowed to mature for a minimum of three years.

The aged whiskey is then blended with those from other barrels to create flavors and achieve consistency per variant. 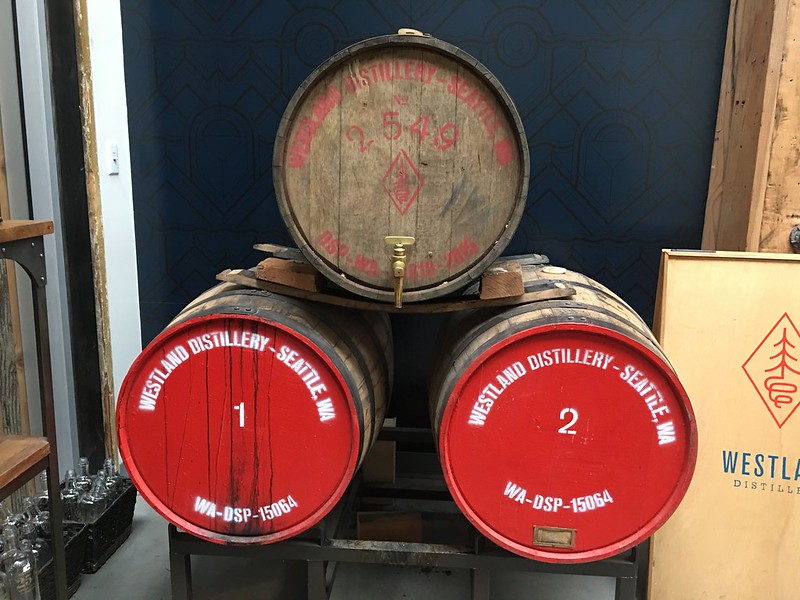 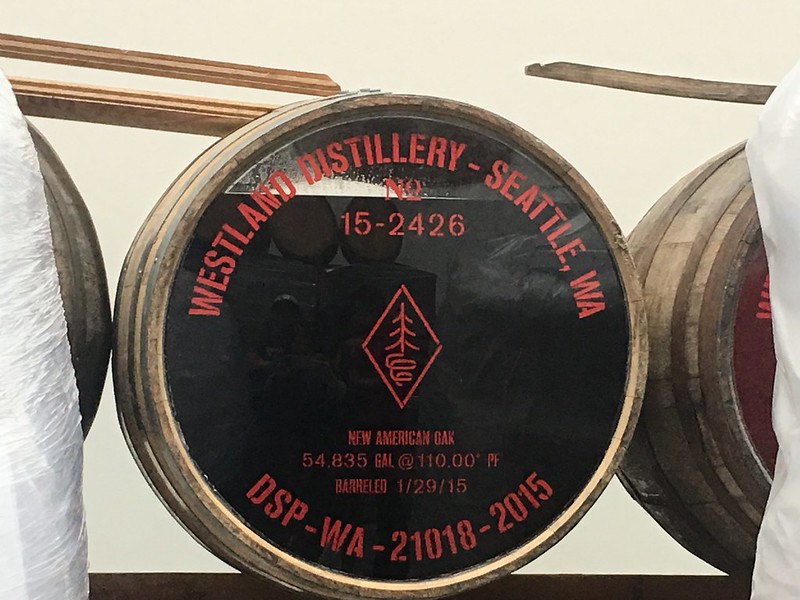 After the tour, we proceeded to the tasting area where we were provided with glencairn glasses.  These feature a tapered mouth and are designed specifically to allow the drinker to appreciate the complex flavors and aspects of fine whiskey.

American Oak. Made use of the five-barley grain bill together with new American oak casks.  It has a combination of cream and citrus smell and has a fruity and chocolatey taste. This has won the Chairman’s Trophy in the Ultimate Spirits Challenge.

Sherry Wood.  Made use of the five-barley grain bill but, this time, with casks previously used to age sherry wine.  It has a sweet maple-y smell and taste.  It won as the Craft Whiskey of the Year in the SF World Spirits Competition.

Peated.  Peated malts were combined with non-peated five-barley grain bill to produce a whiskey that calls back to older traditions.  It has a nuttier smell and has a smokey flavor.  It was awarded Whiskey of the Year by the American Distilling Institute.

Single Cask Release (Cask No. 2549).  Made with pale malt barley matured in casks previously used for bourbon.  It smells of pear and tea and has a fruitier taste. 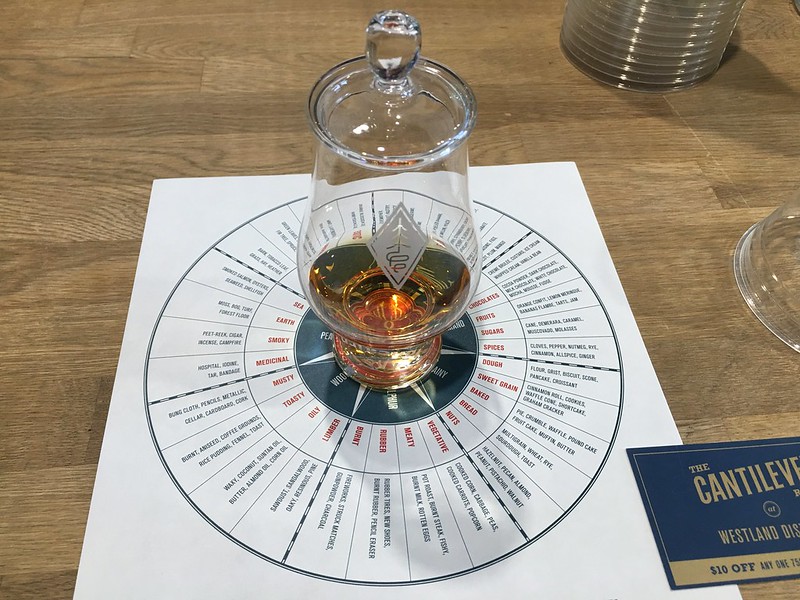 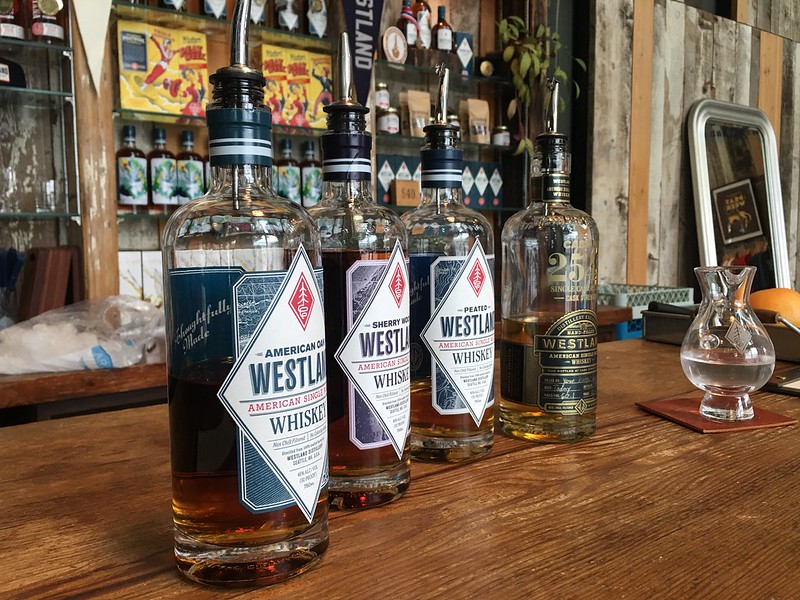 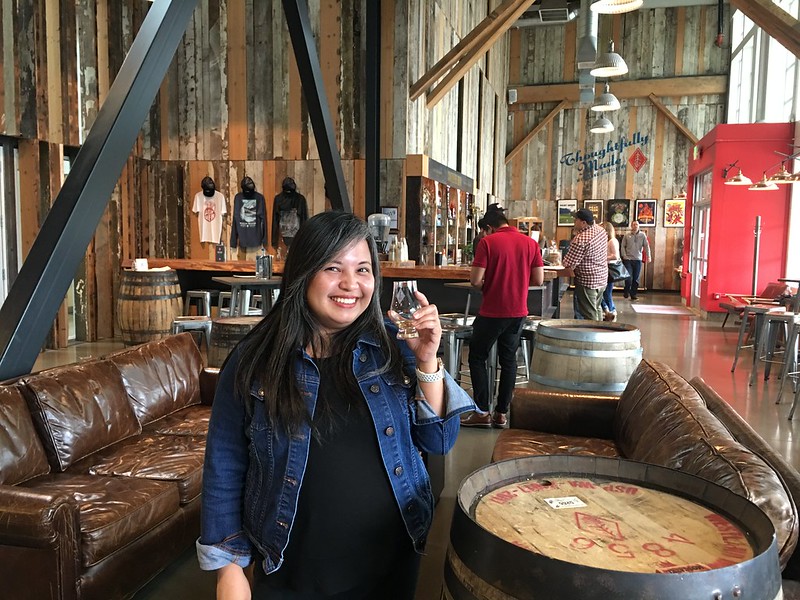 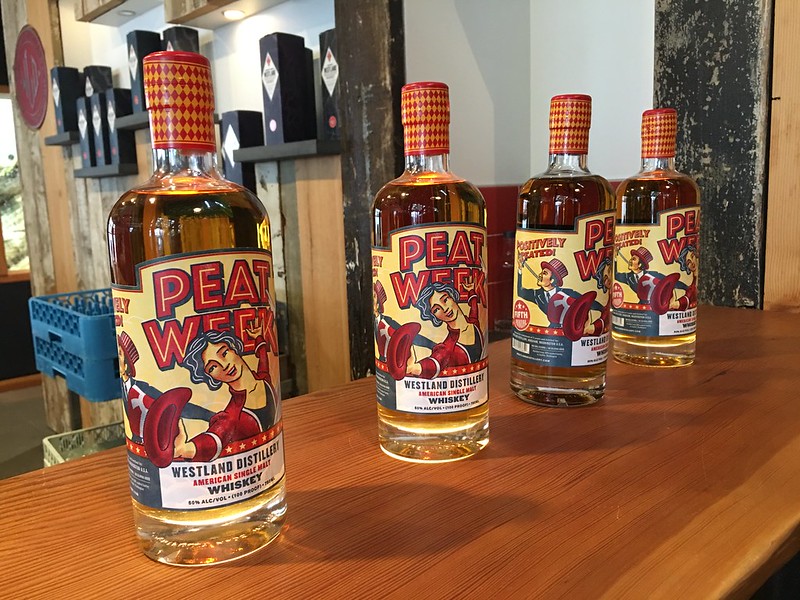 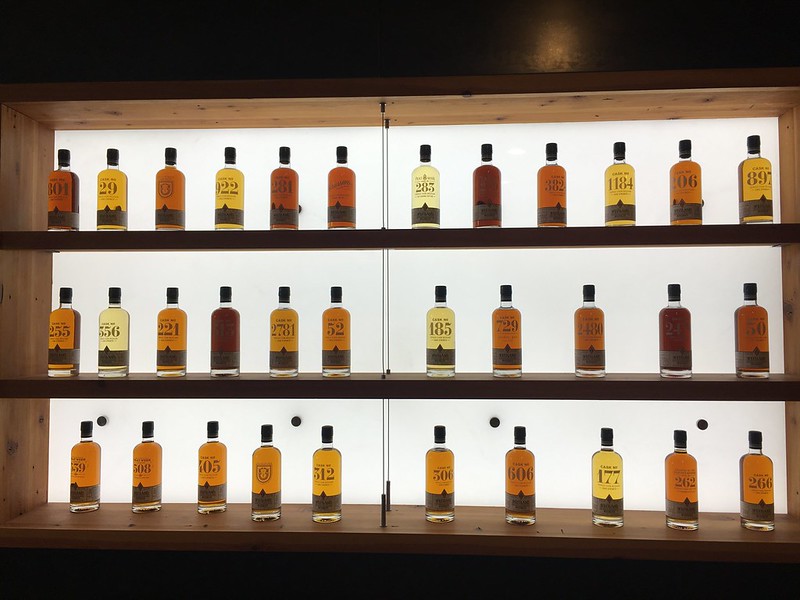 The whiskey tasting was a fun learning and foodie experience for me. I’m not much of a drinker but now I can say that I have a greater appreciation for whiskey.  Whiskey tasting tours are offered from Wednesdays to Saturdays at 12 noon and 4pm, depending on availability.  You can schedule your visit using the distillery’s website.

Westland Distillery is located at 2931 First Avenue South, Suite B, Seattle, WA 98134, open Tuesdays to Thursdays from 12 noon to 7pm and Fridays to Saturdays from 11am to 8pm. For more information, call (206) 767-7250 or visit westlanddistillery.com.

Check out my posts on other beverage tastings: