The Santa Rosa – Tagaytay Road is just teeming with strip malls with various dining options as well as standalone restaurants. Any foodie would be faced with the dilemma of where to eat with so many food choices available.

May I present the Bistro Charlemagne in Nuvali as a viable option? Here are seven reasons why which became even more apparent when my extended family made our way down here after our Tagaytay sojourn. 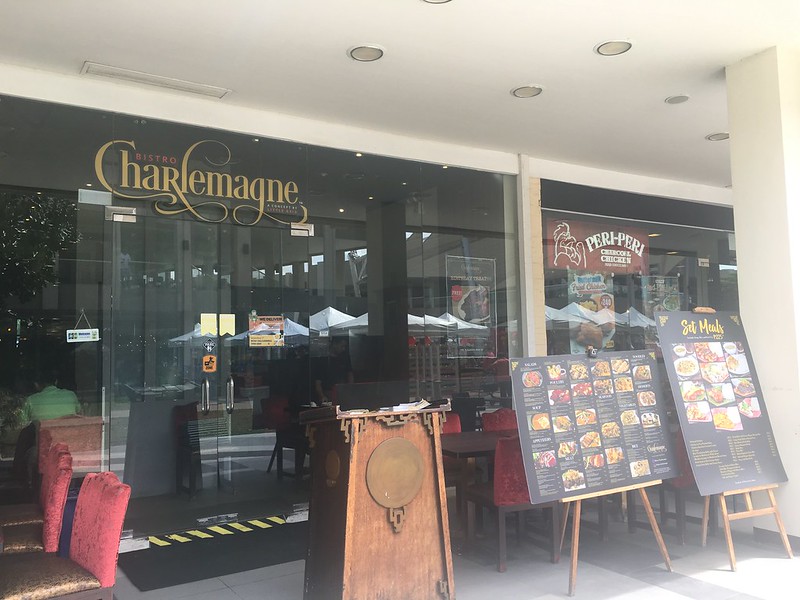 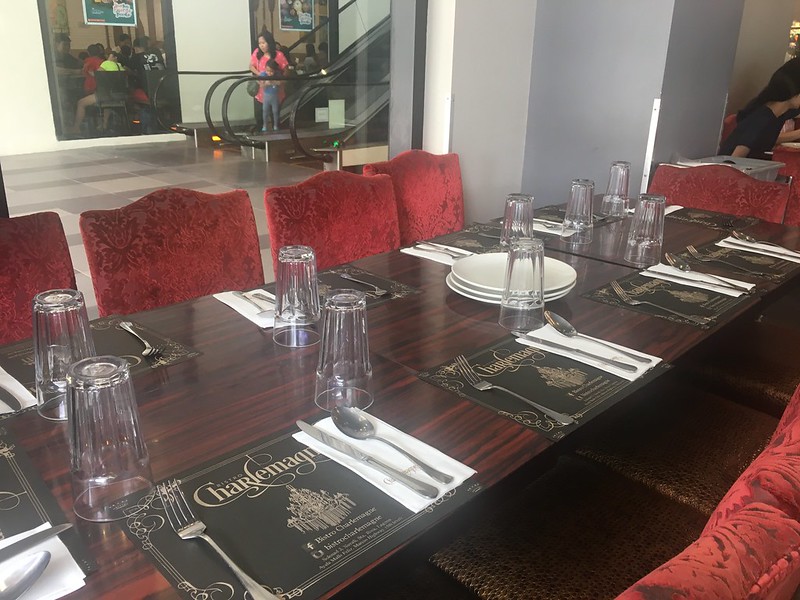 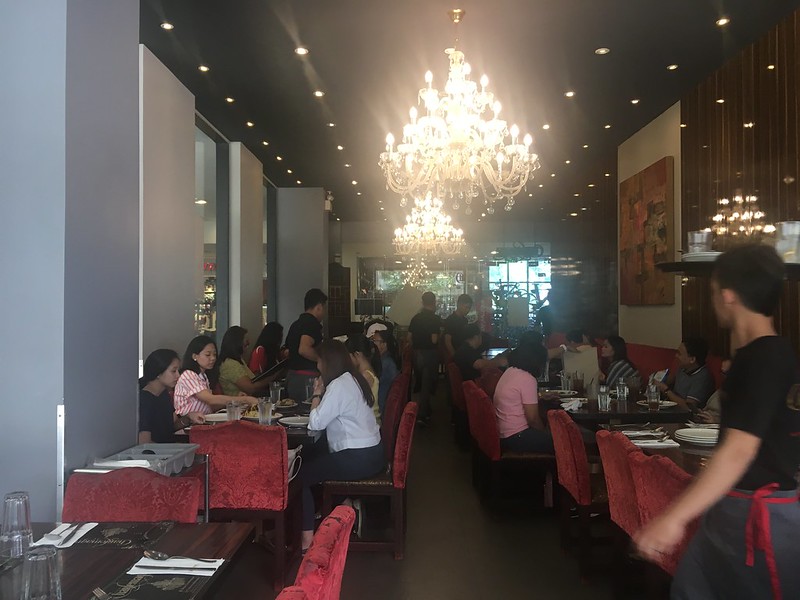 One: It’s where the cuisines of the East and West come together and have a ball

Being a third-generation restaurateur, owner Charlemagne Lim achieves the balance between tradition and novelty in cuisine. The offshoot of Little Asia, Bistro Charlemagne features a little bit of the well-loved dishes its mother-restaurant popularized and a whole lot of new or innovated-upon dishes developed specifically for this new concept resto.

Take the Ceasar Salad (Php295) for example: the crisp Romaine lettuce, classic dressing, shredded chicken breast and slivers of parmesan cheese are to be expected and quite yummy… but add delicate boiled quail eggs into the fray? Say what?!? 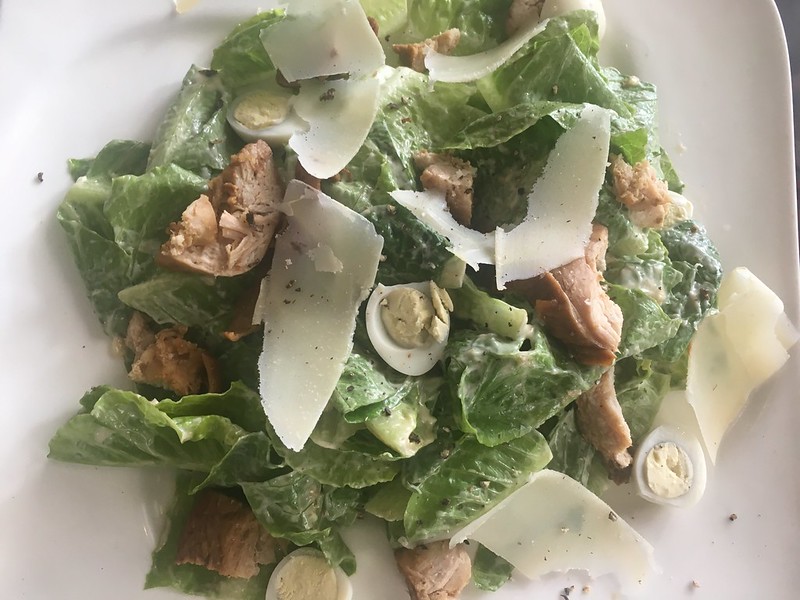 How about the Crispy Lumpiang Hubad (Php305)? The classic shredded and sautéed vegetables that make up the local fried vegetable rolls of our childhood are served on top of a crisp pastry while doused in garlic sauce and sweet soy dressing. 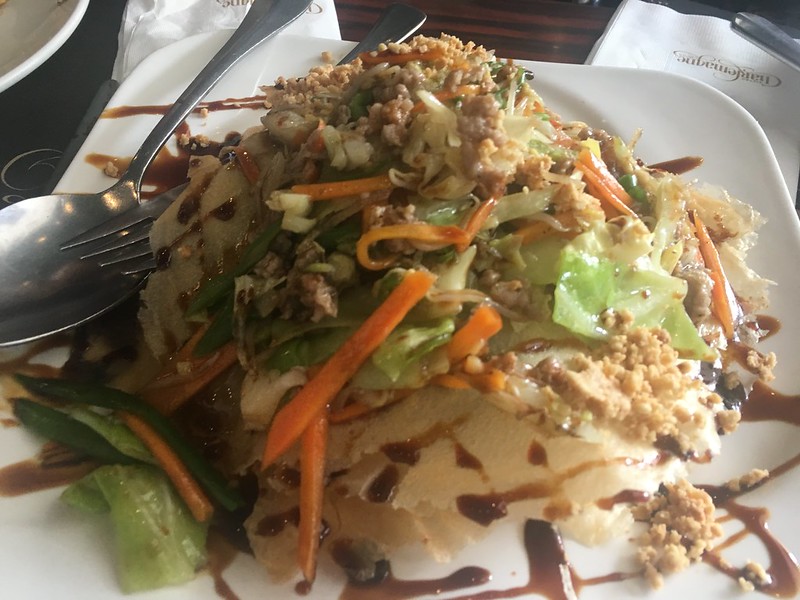 The much-raved about Beef Tenderloin Rolls with Cheese (Php405) did not disappoint either. Our group loved the finely rolled tenderloin slices stuffed with melting cheese on top of authentic teriyaki sauce that we ordered for another plate of these goodies. 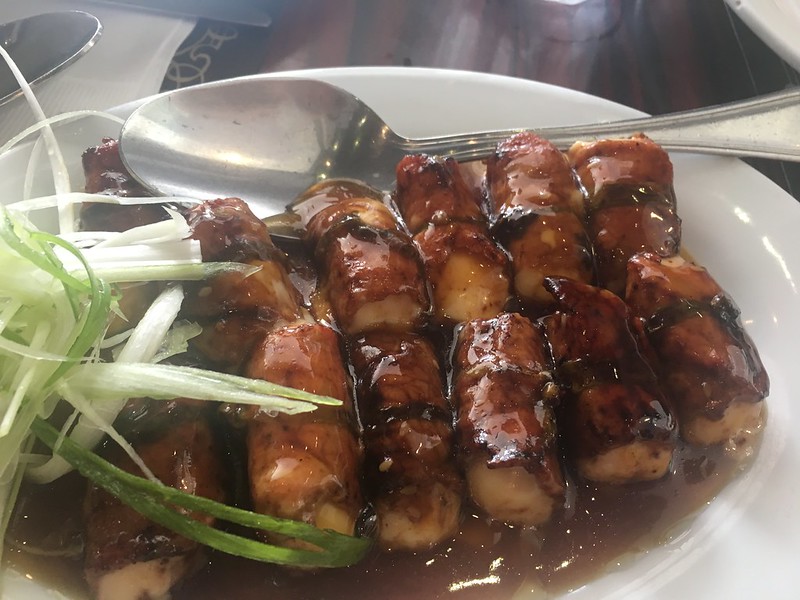 Or consider, a new favorite of my daughter #ExhibitA and myself, the Drunken Lengua in Mushroom Brown Sauce (Php405). Those melt-in-your-mouth tender morsels of pan-seared ox tongue are served with mushrooms and asparagus spears on a bed of rich buttery brown sauce. If you had misgivings about eating the more exotic meat parts like ox tongue, this will change your mind. 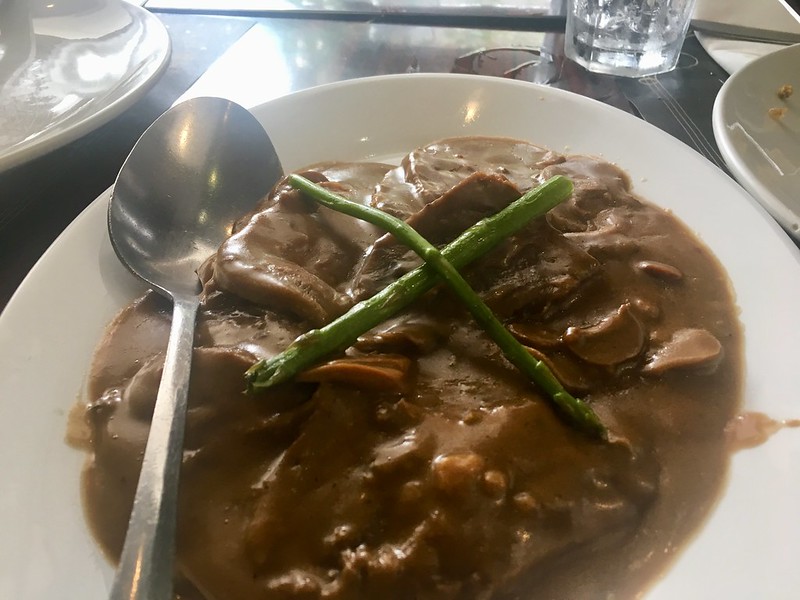 The Japanese Beef Fried Rice (Php125) tasted the Kamameshi Rice of Japanese restos but had a lighter feel. It went so well with our viands that we consumed three bowls of it. 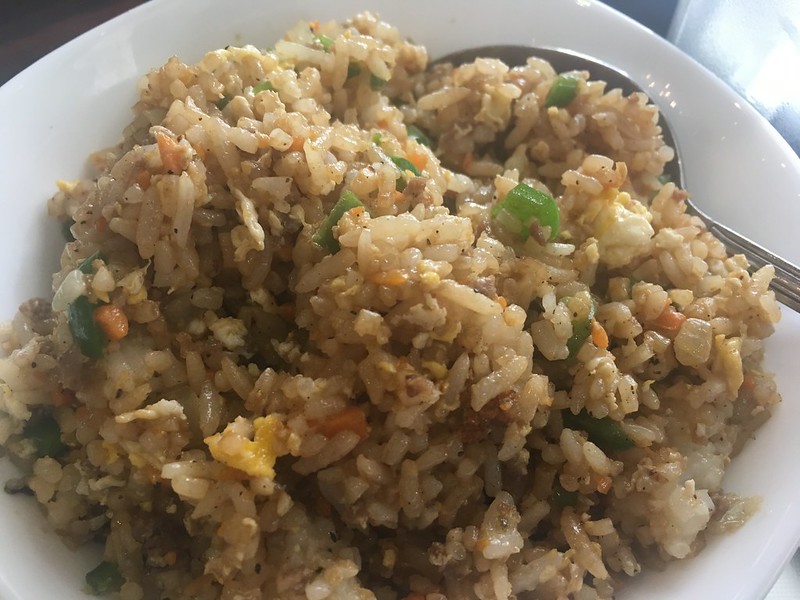 Two: Your favorites are here too!

Missing the taste of the familiar? No need to fret because old-time favorites are also available on the menu for those seeking more of the flavors they loved and less of the adventure into the unknown.

These include the Tuna Tataki (Php305), an appetizer made of lightly seared tuna loin lightly coated in a crust of sesame seeds and served with the traditional Japanese ponzu sauce. (And yes, we got two orders of these.) 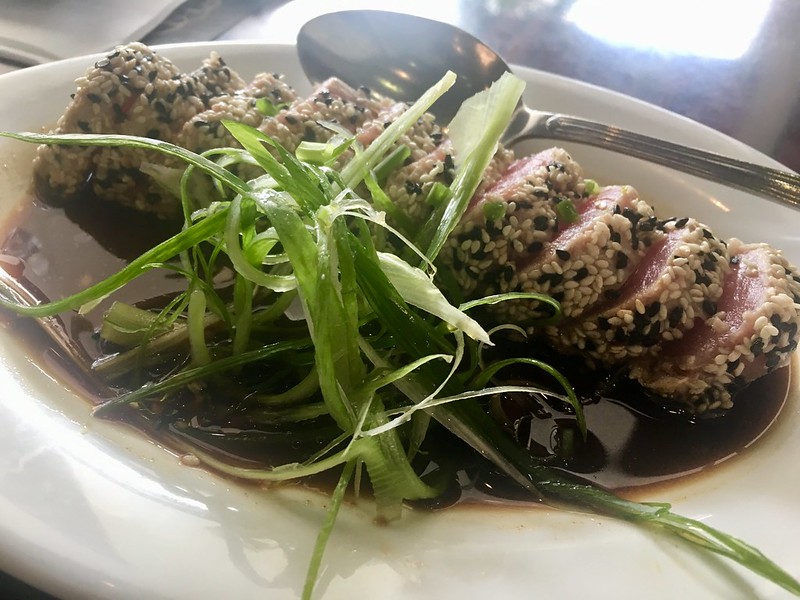 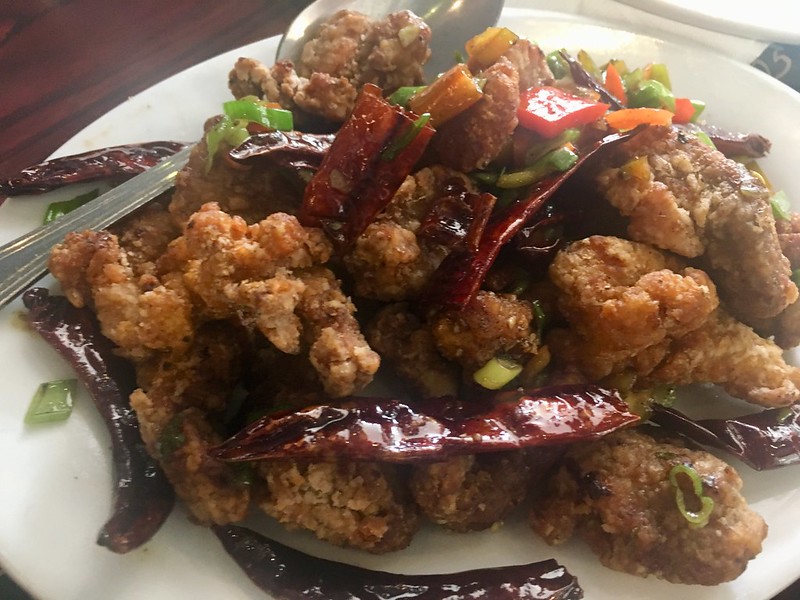 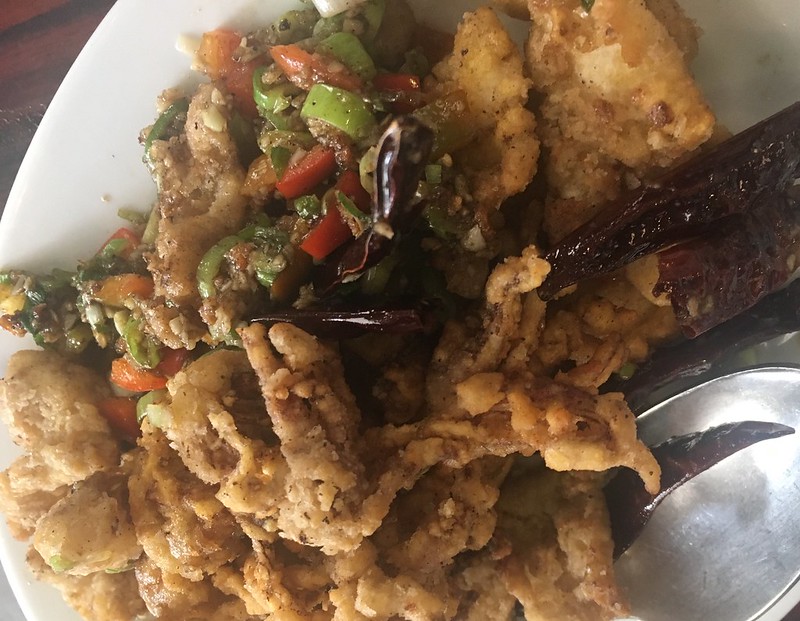 And because we Pinoys, for some reason, can’t fathom a family meal without a vegetable dish, there’s the Brocolli with Prawns and Mushrooms (Php445). We had one of these as-is, while another was made without the prawns to suit the taste of one of the little ones in our party. 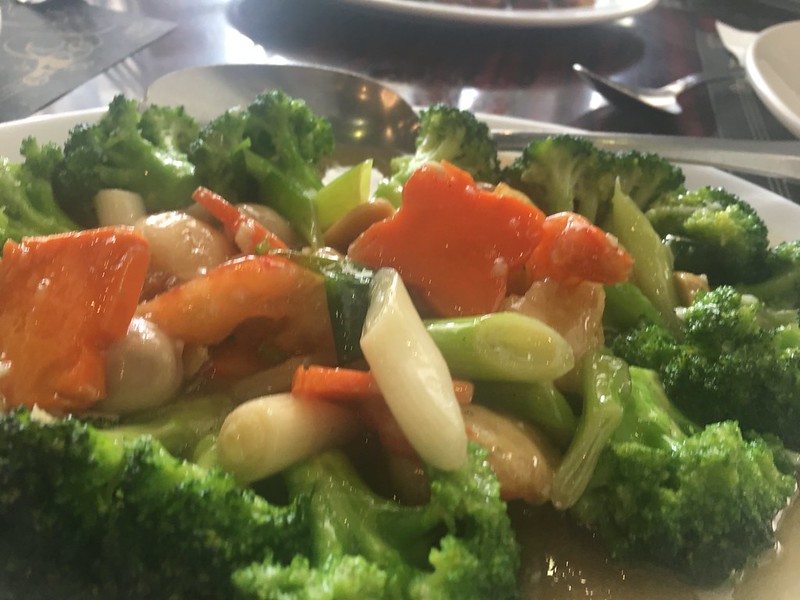 Too bad the Chicken Fingers (Php345) did not make it to our table on time so we just had that wrapped to go.

Three: There’s something for your sweet tooth

Knowing the kiddos’ predilection for peanut butter, I ordered a serving of Reese’s S’mores (Php245). It turned out that dipping crisp graham crackers into warm toasted marshmallows resting on a ganache of peanut butter chips is a decadent treat, not just for the young ones but also for the grown ups! 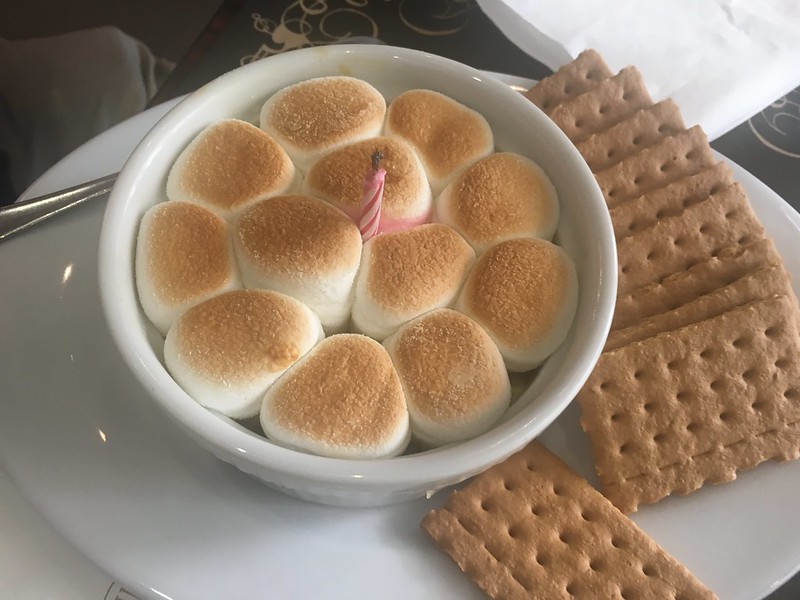 And wouldn’t you know it; we had another serving of this yummy dessert because…

As Hubby’s natal day was within seven days of our visit to this resto, we were given a free serving of the house special Little Asia’s Crispy Chicken, one of the recipes passed down from Charlemagne’s forebears. (We simply had to present a valid government-issued ID as well as reach a minimum single-receipt transaction of Php1,995.) 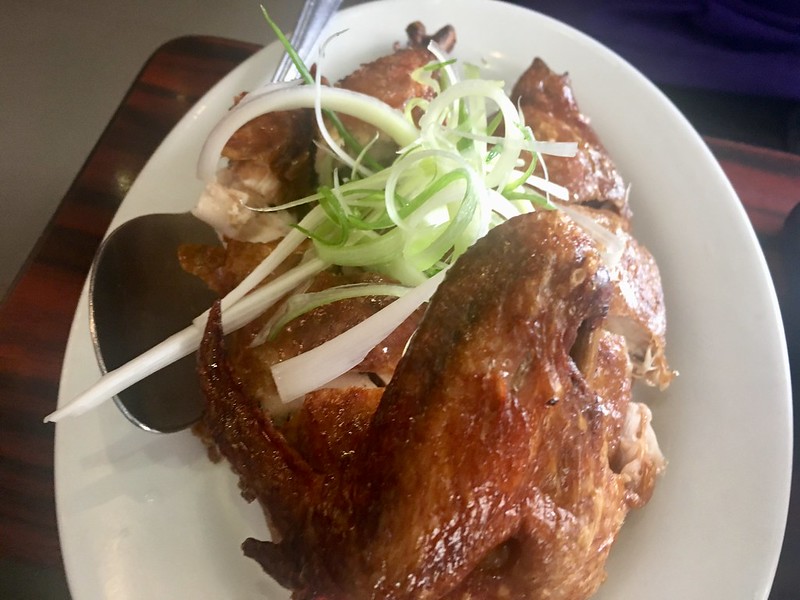 A candle was placed right smack in the middle of another Reese’s S’mores for Hubby to blow out while the restaurant staff sang a Chinese version “Happy Birthday to You.” 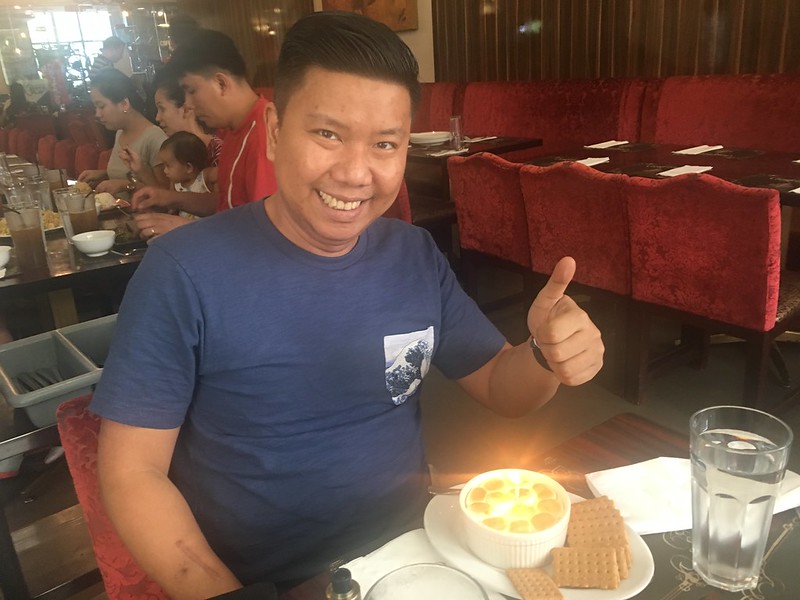 Five: Did you know Bistro Charlemagne catered to international stars?

When top musical acts such as Katy Perry, Ariana Grande, Smashing Pumpkins and Paramore had their concerts in the country, Bistro Charlemagne was in charge of keeping the stars and their entourage well-fed.

Six: On a budget? No sweat!

When petsa de peligro comes along, you can still satisfy your craving for your favorite Bistro Charlemagne dish with a set meal at only Php215! This already comes with rice, soup and iced tea.

Even if your road trip takes place in the days leading to the Holy Week, you can still keep your Lenten observance with Bistro Charlemagne’s new seafood offerings such as Crispy Fish Fingers, Octopus ala Pobre and Baked Salmon in Truffled Spinach Cream Sauce. 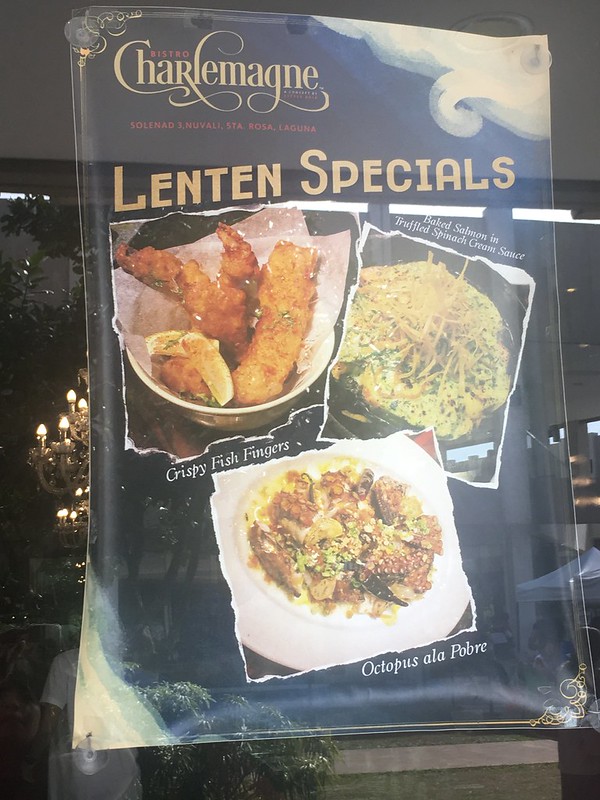 Thanks to Bistro Charlemagne for serving as the tasty final stop of our Tagaytay weekend sojourn! 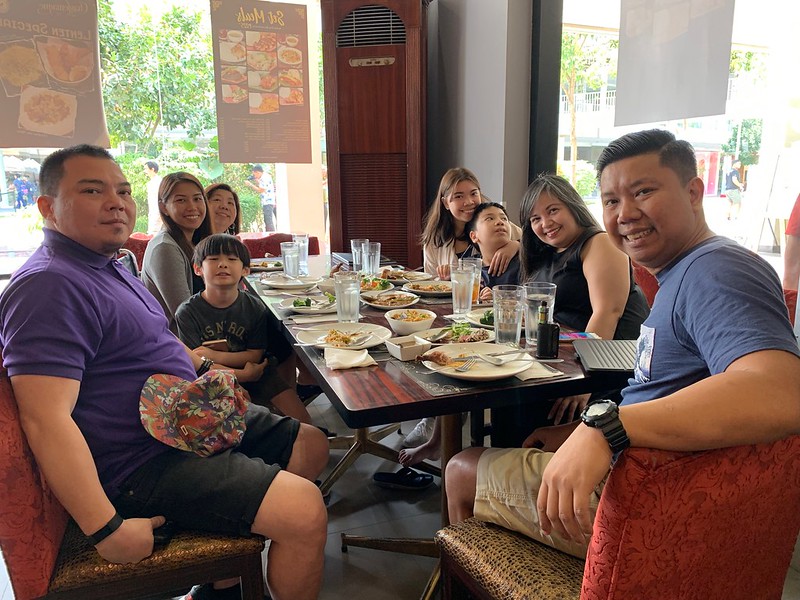 Check out my review of its branch in Pasig here: East meets West at Bistro Charlemagne, Ayala Malls Feliz

One thought on “Seven Reasons why Bistro Charlemagne, Nuvali is your road trip foodie stopover”