My #RamenPhase has already spanned years.

From the first time I had a taste of what real Japanese ramen could be (as opposed to the instant noodles the defined the term during my childhood) I was hooked.

Since then, I’ve always been on the lookout for places to enjoy those firm, freshly made noodles in hot flavorful broth. I’ve tried a number of ramen restaurants in the metro already but this is the first time I’ve tried Sigekiya Ramen. 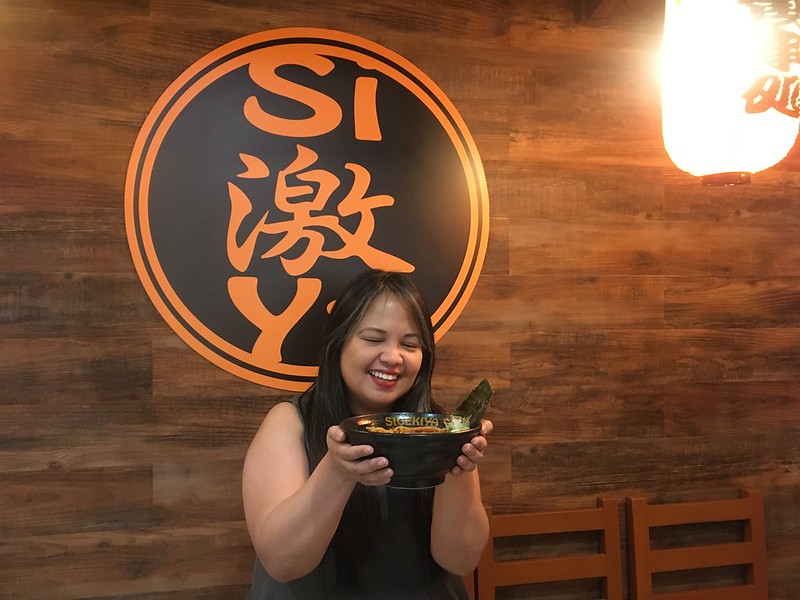 A franchise of the famous ramen chain in Yokohama, Japan, this shop opened in Estancia Mall’s East Wing in November last year. The place has a down-home izakaya feel to it, with colorful banners and lanterns hanging from the ceiling and a peek from the ramen bar into the hustlin’ and bustlin’ scene in the kitchen where the ramen orders are freshly made. 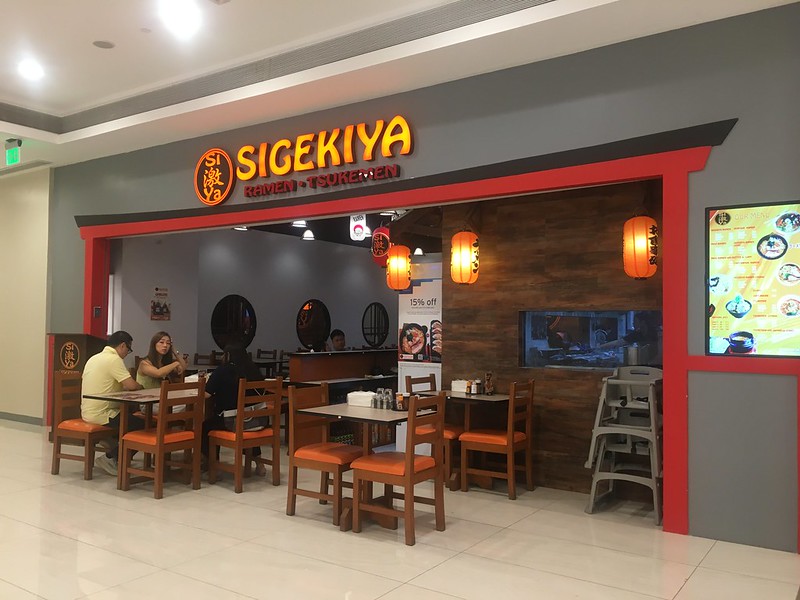 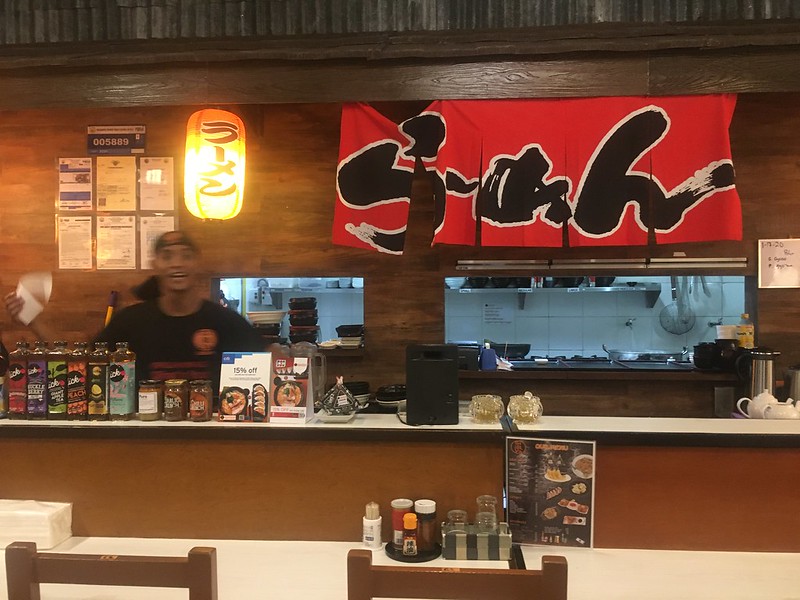 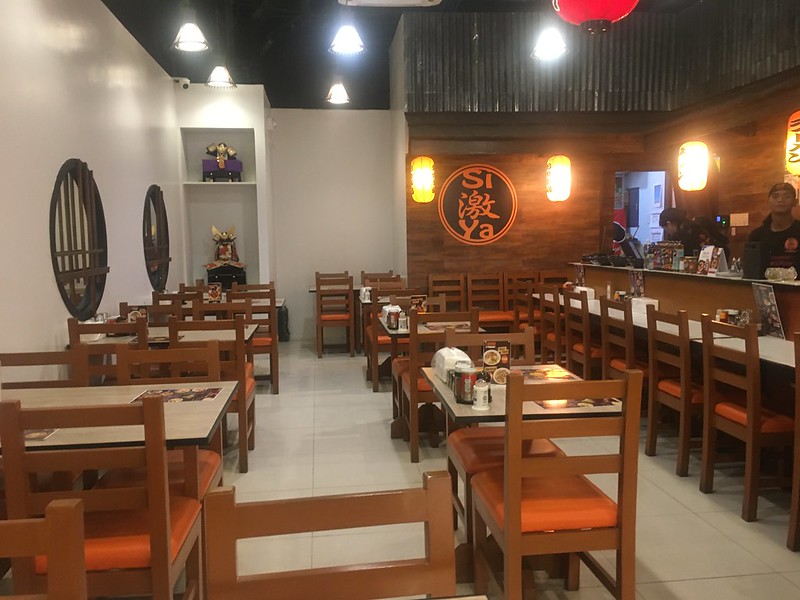 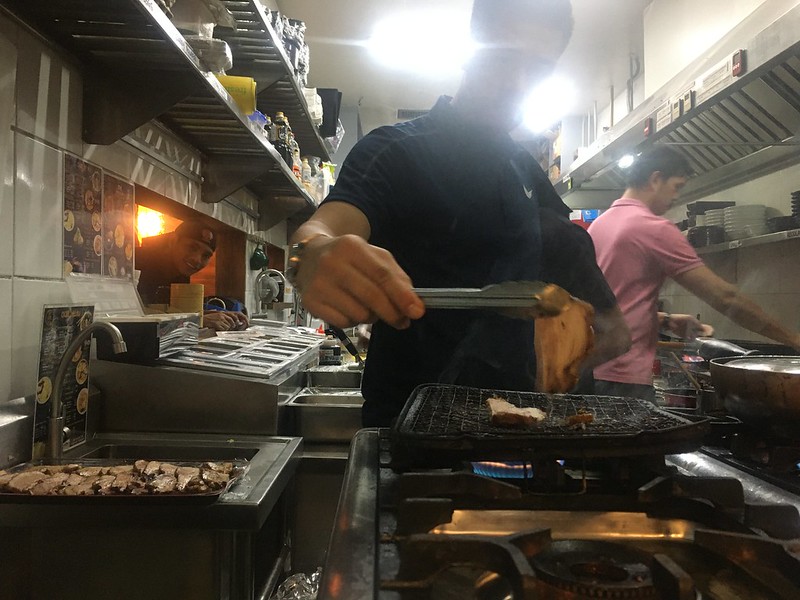 Last Sunday, together with my fellow East-based foodies, I had a taste of Sigekiya’s celebrated offerings, which included: 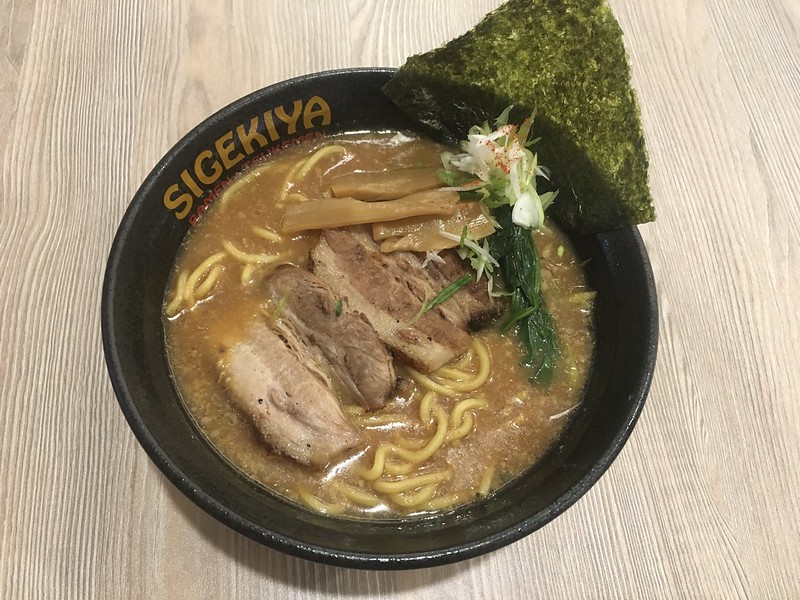 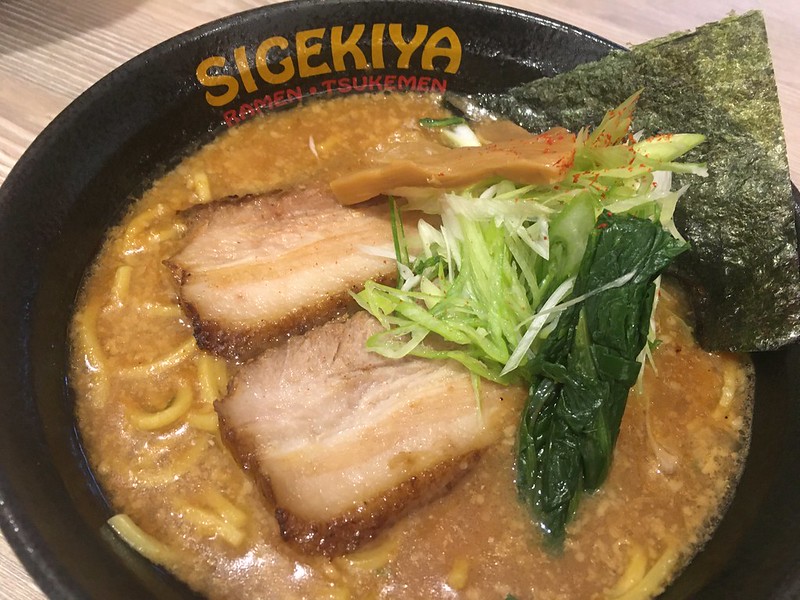 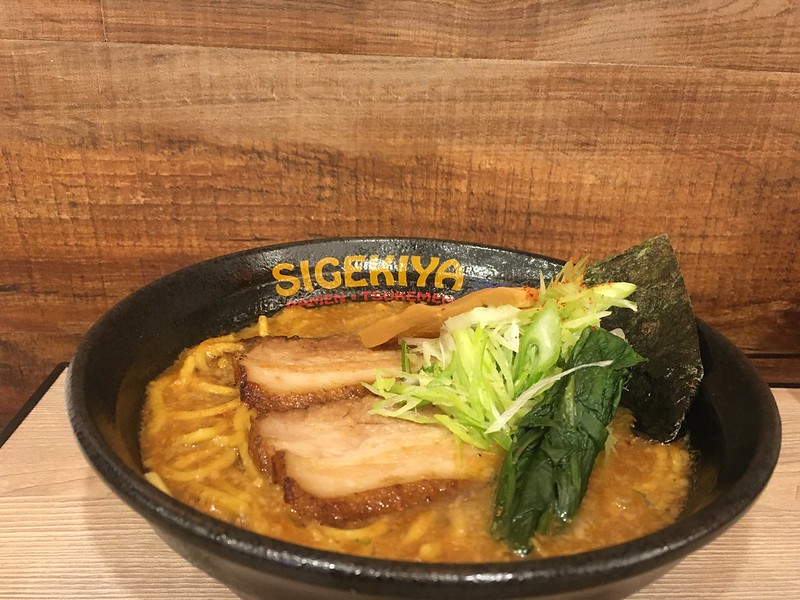 Tsukemen (Php375 small | Php420 regular | Php500 large). The so-called “dipping ramen.” Instead of being immersed in the pork broth, the ramen noodles are eaten after being dipped in the soup which is more intense in flavor than the normal ramen broth. A version called Tsukemen Gyokai (Php385 small | Php430 regular | Php510 large) is also available wherein the pork broth is supplemented by fish powder, giving the ramen another dimension in flavor. 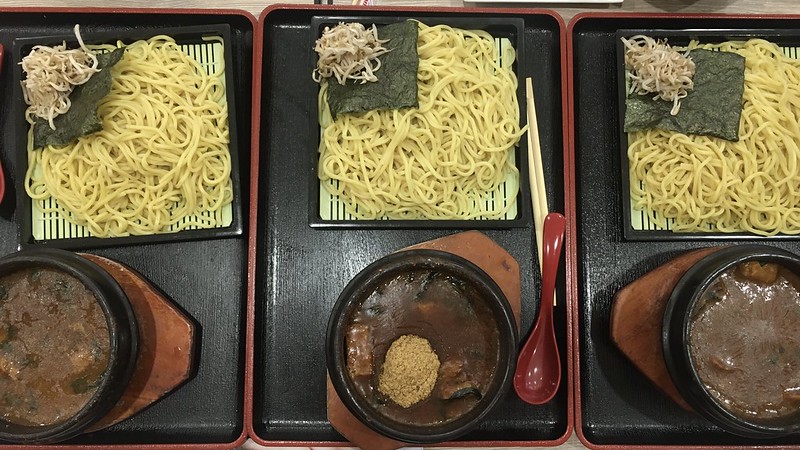 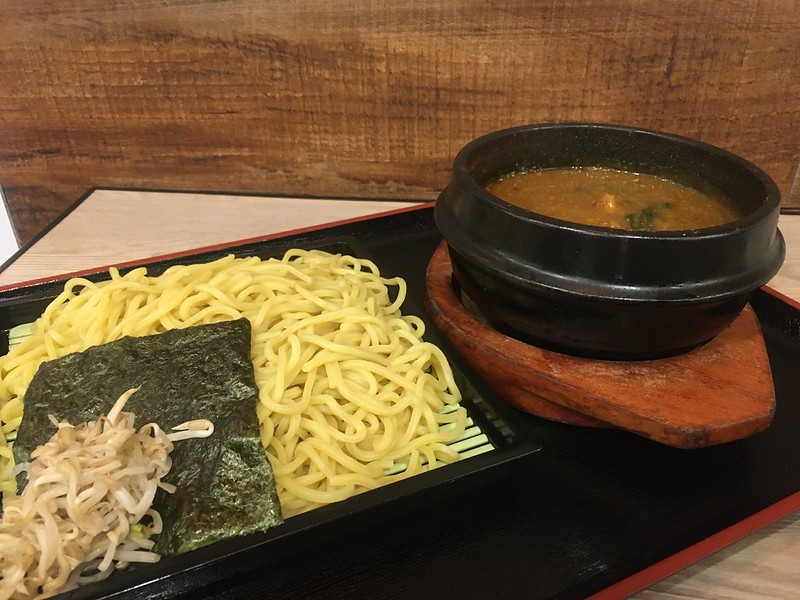 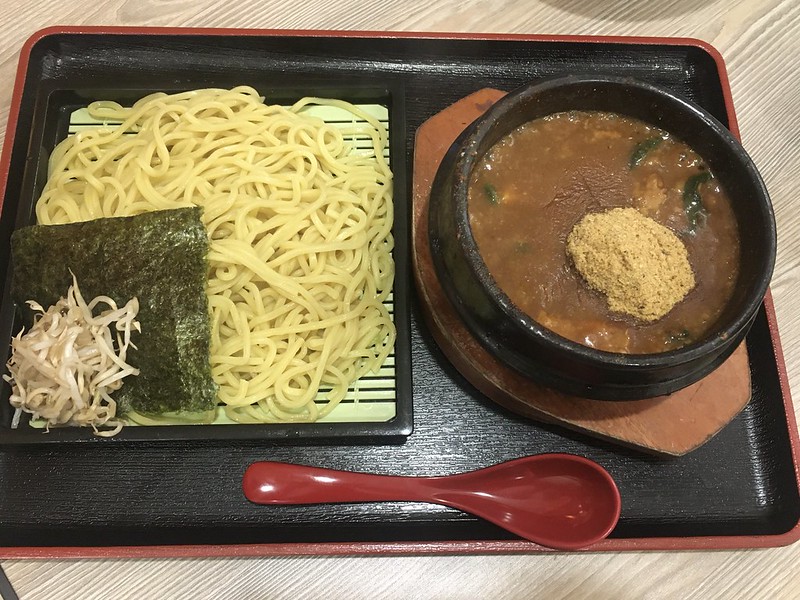 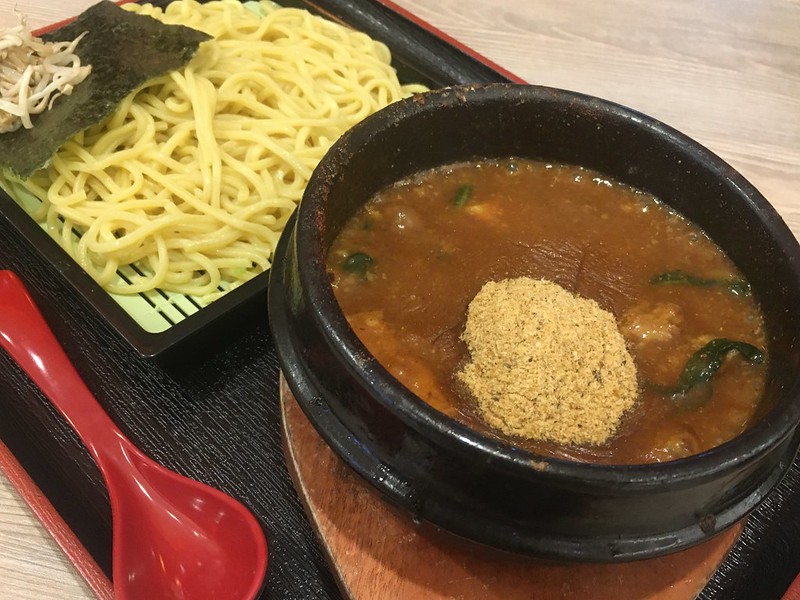 Tantanmen Ramen (Php325 small | Php375 regular | Php420 large). Sigekiya’s take on the spicy Dandanmian noodle dish which originated in China. With a hearty peanut-based broth, ground meat and chopped veggies, this is a filling meal for the ramen lover.

Gojira (Php380). The name sounds so similar to what the Japanese call the monster Godzilla, hehehe! (I wonder if that’s intentional, hmm…) Well, this ramen bowl is such a monster in terms of serving size. With all those noodles, meat, loads of garlic and veggies, you’ll really get your fill. 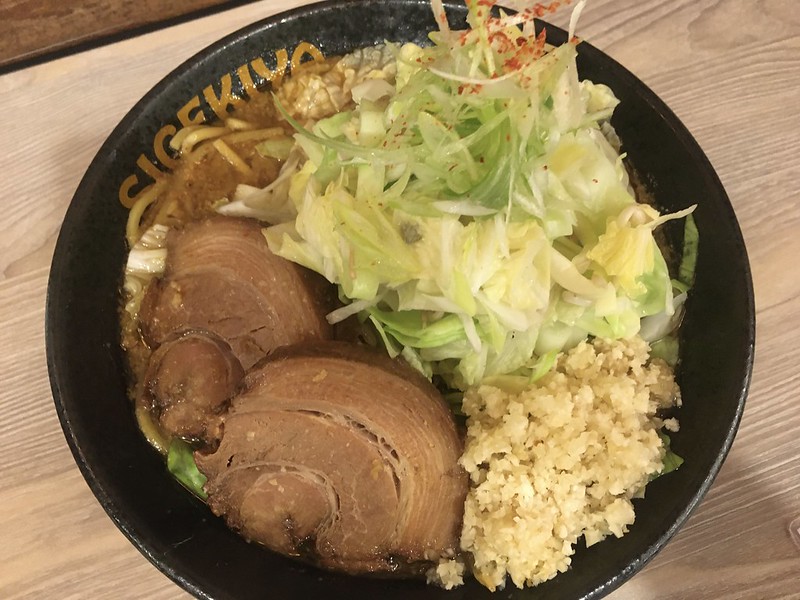 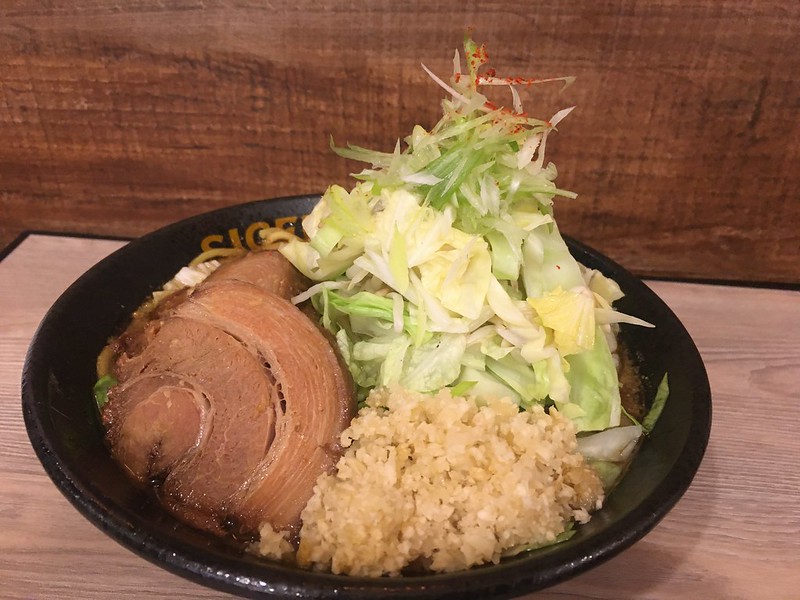 Shirunashi (Php380). Another ramen that has very little soup, just a bit of rich-tasting sauce that together with a freshly cracked egg, veggies and loads of garlic to bring flavor and texture to the noodles. 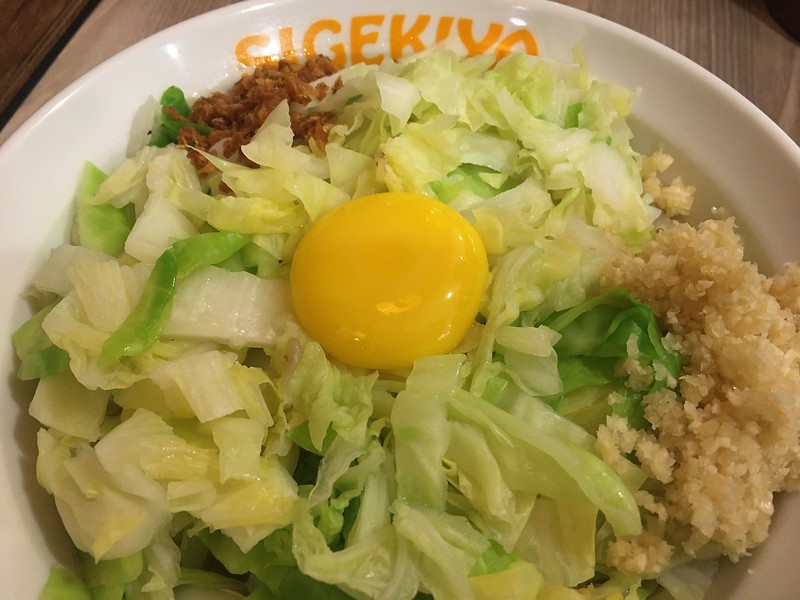 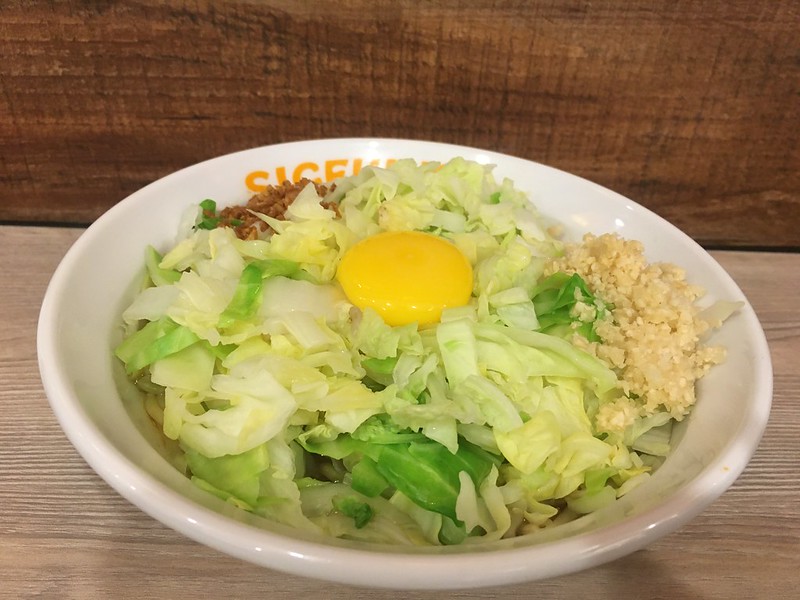 Gyoza (Php110 for three pieces | Php160 for five pieces). Pan-fried dumplings filled with seasoned ground pork flavored with aromatics. The gyoza here are larger than the usual gyoza and are among the most delish my friends and I have tasted. 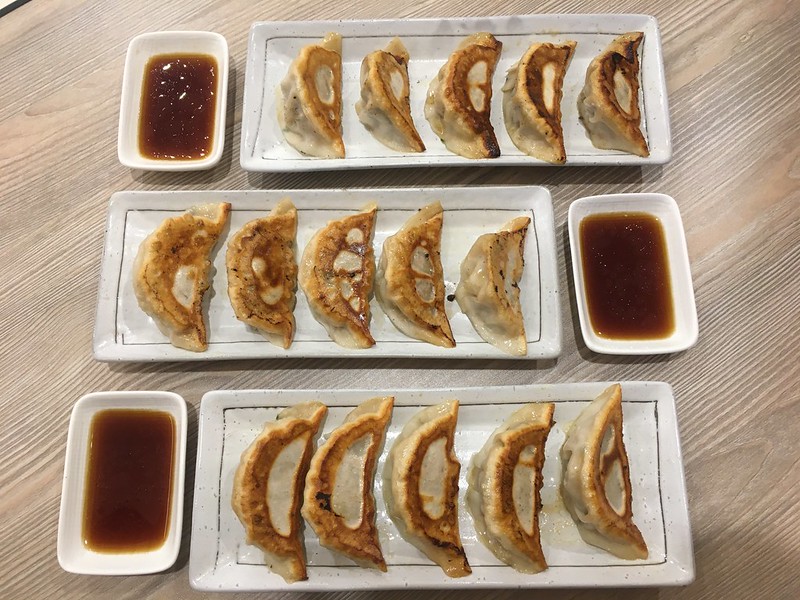 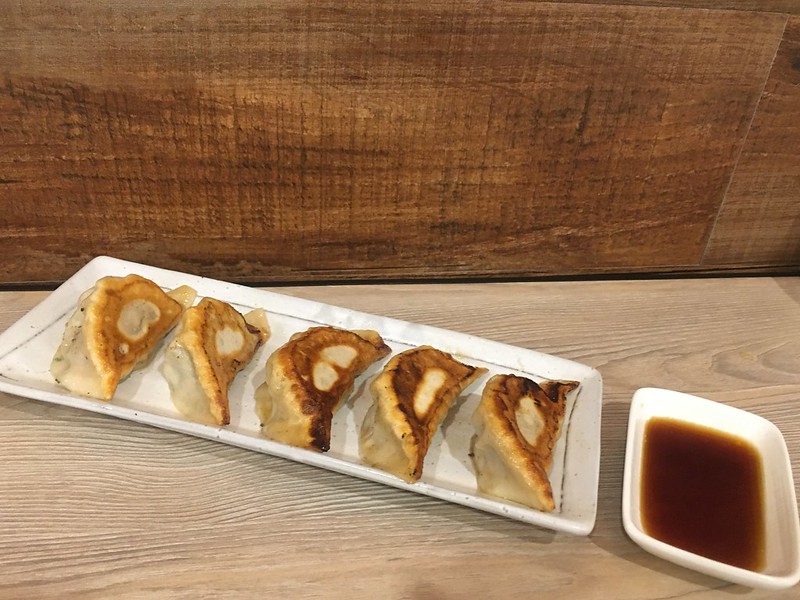 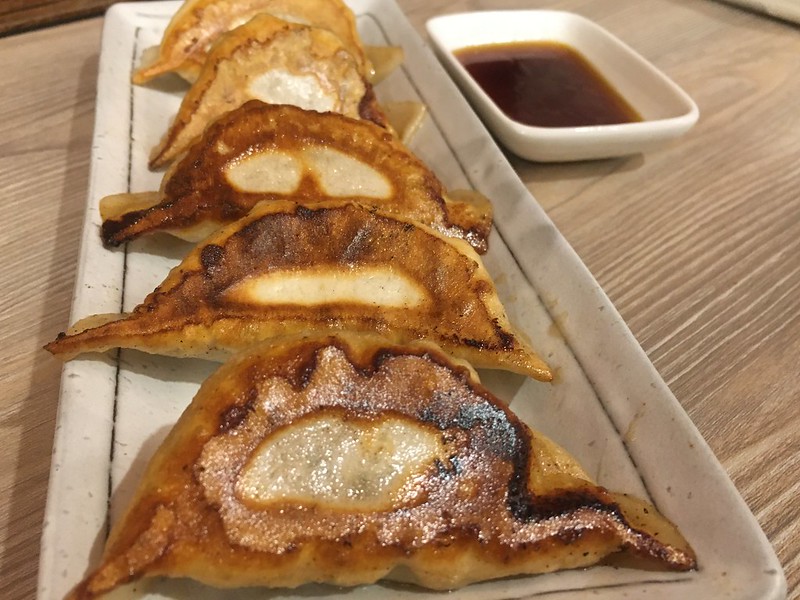 Okonomiyaki (Php160). Sigekiya’s version of the savory Japanese pancake is served on hot plates and topped with Japanese mayo and smoky bonito flakes. 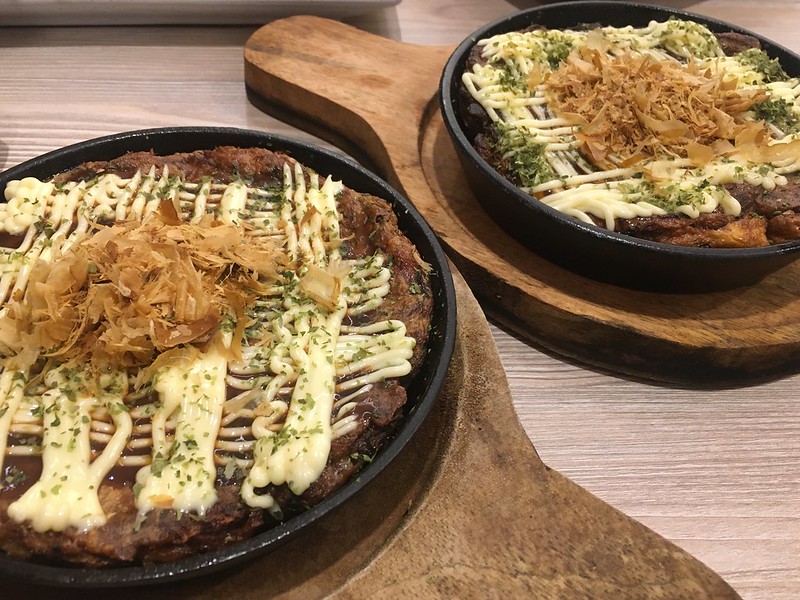 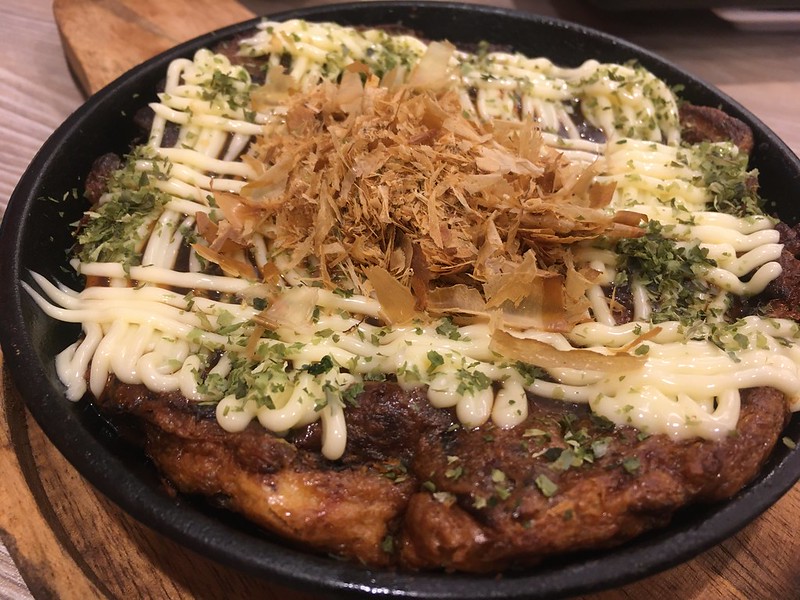 Chicken Karaage (Php215). This version of the Japanese fried chicken is served with a sweet chili sauce but, trust me, request for some Japanese mayo and dip the karaage there instead. Add a bit of wasabi for a bit of spice. 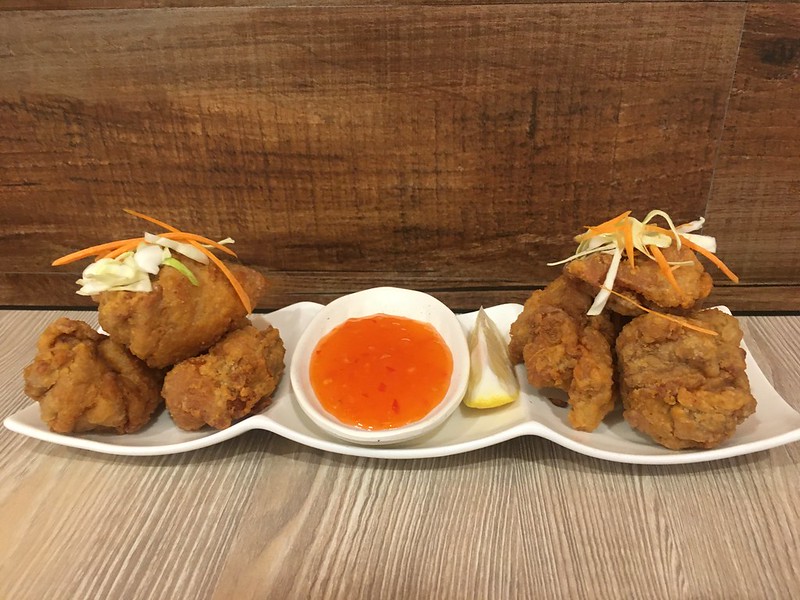 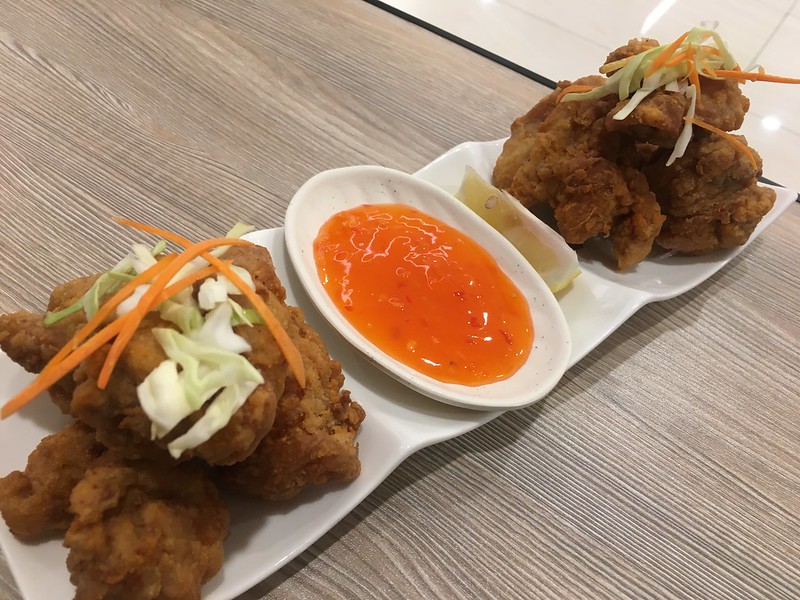 Many thanks to Miguel Illescas and the crew of Sigekiya Ramen for the warm welcome and the delicious food! 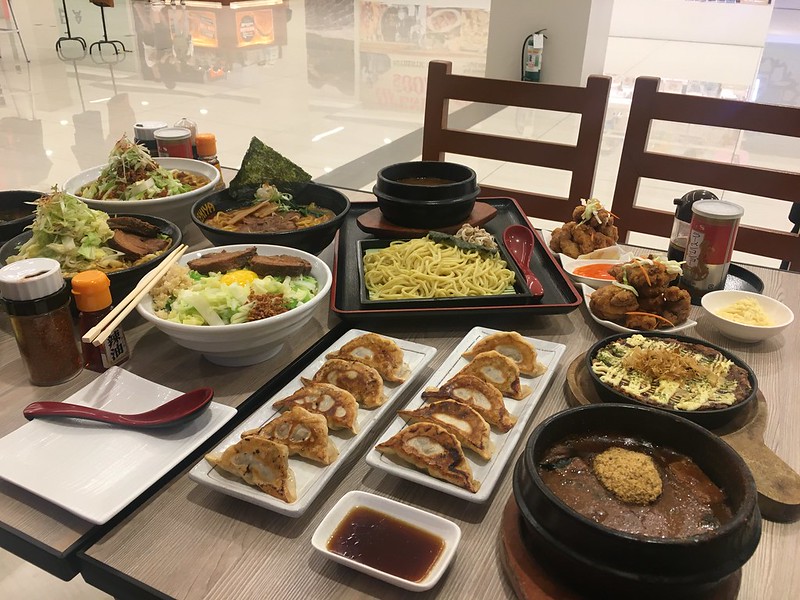 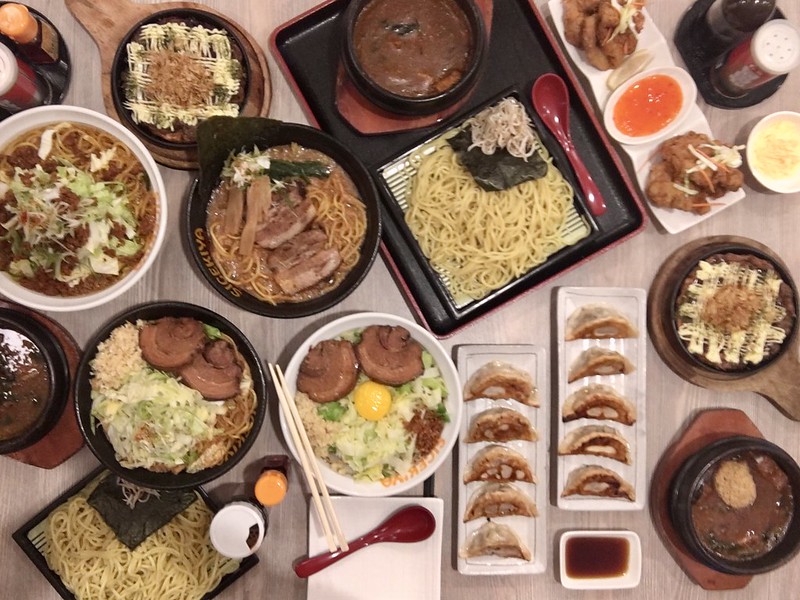 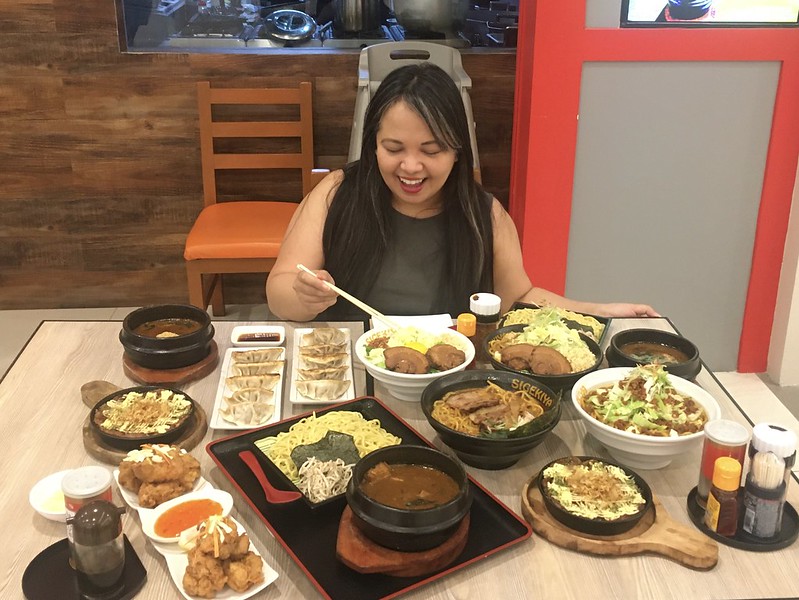