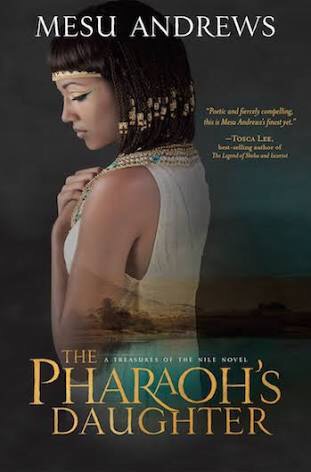 Mesu Andrews first sparked my interest in biblical fiction with her first novel about the sufferings and redemption of Job and Dinah Love Amid the Ashes which was then offered as a free e-book on Amazon.com.  This led me to purchase the next books in the series: Love’s Sacred Song which details the love story of King Solomon and his Shunemite shepherdess bride, and Love in a Broken Vessel which depicts the thorny and complicated relationship between the prophet Hosea and the prostitute Gomer.

With The Pharaoh’s Daughter, the first of her Treasures of the Nile series, Andrews provides an interesting narrative and historical backdrop for Moses’ ascendance as the savior of the Hebrews from slavery in Egypt. Here, the edict for killing the male Hebrew babies was issued by the boy king Tutankhamen, manipulated by his vizier Ay. Moses’ adoptive mother and the titular Pharaoh’s daughter is Tut’s sister, Merytaten-tasherit, later renamed Anippe.

The novel depicts Anippe’s decision to claim the Hebrew baby Moses (whom she renames Mehy) as her own, and how that decision changed the lives of her family and the Hebrew slaves whose lives depended on the royal family.

Pharaoh’s Daughter also provides sneak peeks into the lives of Hebrew slaves, some of which were named in the Bible:

While comparing and contrasting the lives of Egyptian nobility and Hebrew slaves, The Pharaoh’s Daughter also underscores the need for hope and faith, as well as illustrates how God brings people into His fold.

With this novel, Mesu Andrews further cements her place as one of the leading writers of Biblical fiction.

I look forward to reading the next book in the Treasures of the Nile series which deals with Miriam’s story.

Click here to buy The Pharaoh’s Daughter on Amazon.com.

Join 5,597 other followers
Follow Jellybeans in the City on WordPress.com