Korean barbecue fans, you definitely have something new to be happy about.

Marikina, already home to a vibrant and varied food scene, now has another place that offers all the meats, seafood and side dishes you can eat at super affordable prices.

Located at the Wood Park Food Hub along E. Santos Street, YumEaTeh! has been serving up exciting Korean barbecue packages (named after Japanese icons, of all things!) to Marikina denizens since it began operations early this year. 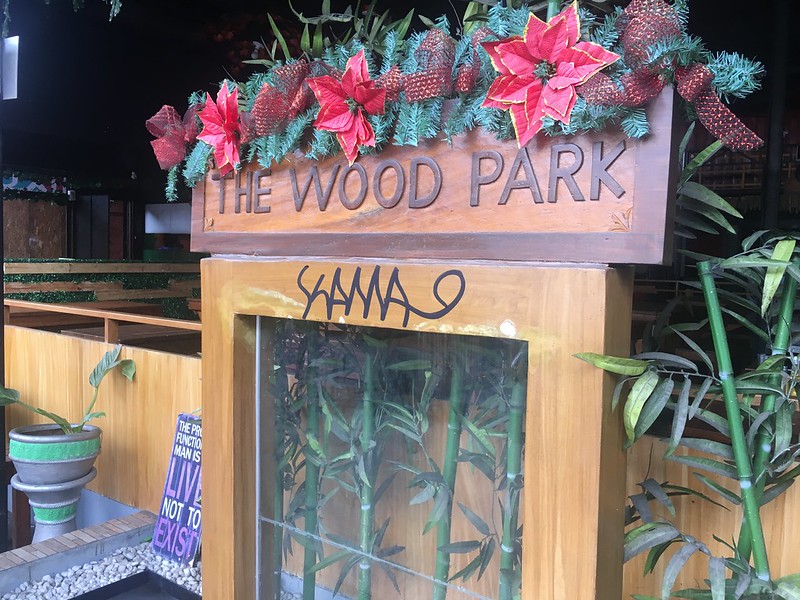 As explained by the co-owners, Eric Tan and JM Alcantara, “YumEaTeh” has the same sound as the Japanese word for “stop.” They conceptualized their offers to be so filling that diners will eat their fill until they just want to stop. 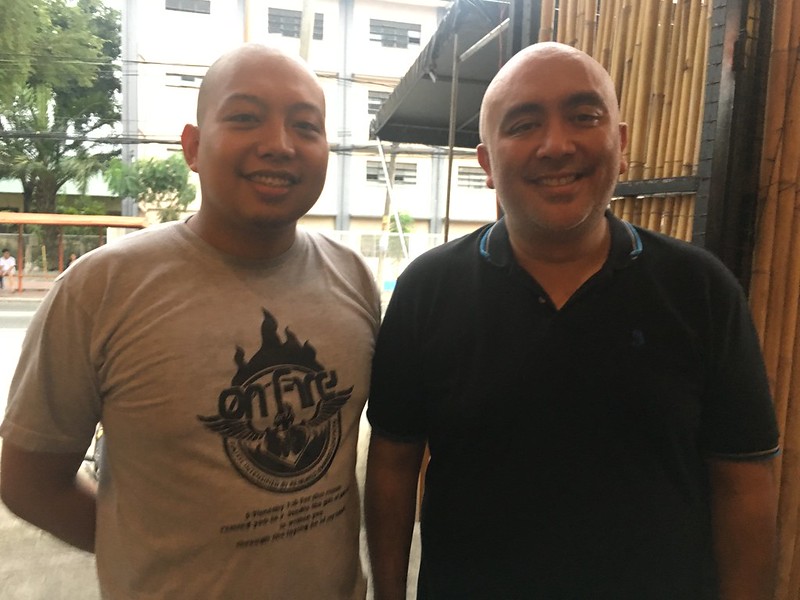 Well, let’s take a look at its much-vaunted unli meal sets, shall we? 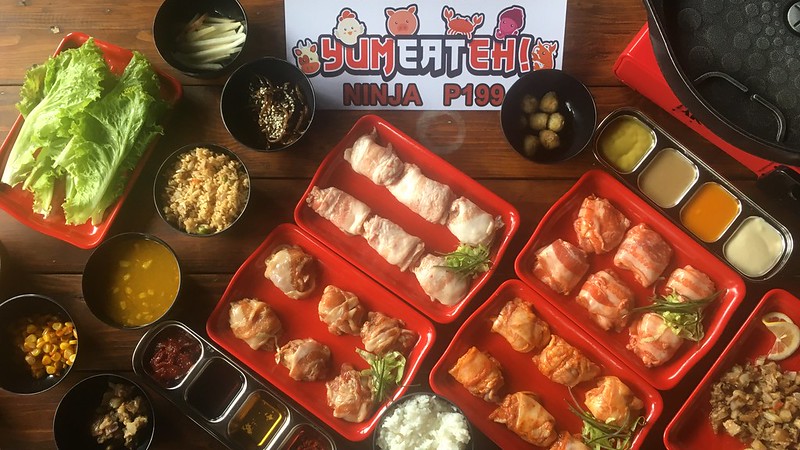 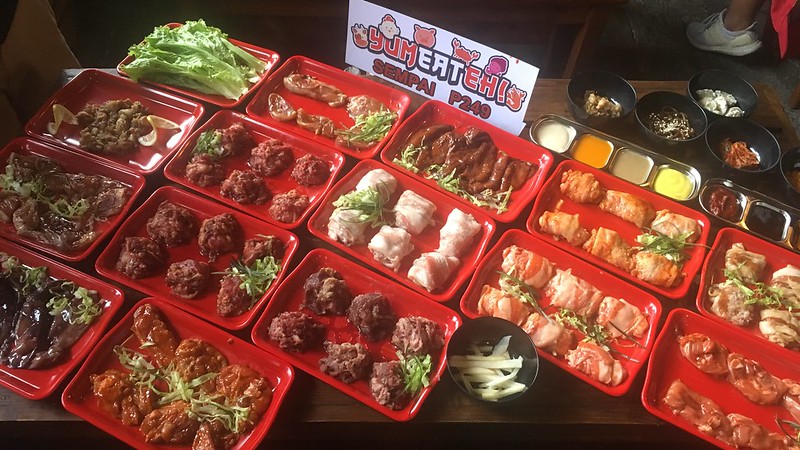 Hokage (Php399), on the other hand, gives you twelve different meat flavors that include the pork, beef, chicken and squid flavors included in Sempai, as well as five-spiced boiled crab, salt and pepper shrimp and ginger garlic mussels. 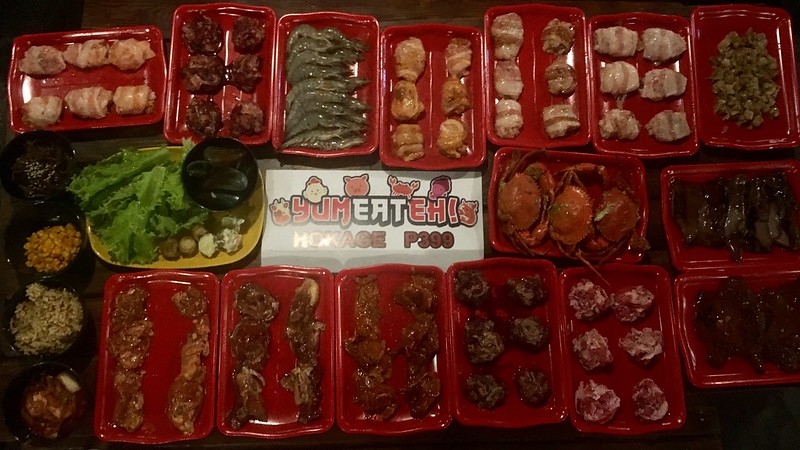 Lastly, with Hokage Supreme (Php499), you can enjoy twelve different meat flavors that include the pork, beef, chicken and squid, crab, shrimp and mussels flavors included in Hokage as well as deep-fried and butter garlic crab, butter garlic shrimp and tempura, hotpots of laksa, tantanmen and tomyum/sinigang, deep-fried squid and chicken poppers. This set also comes with a free liter of iced tea for every four people. 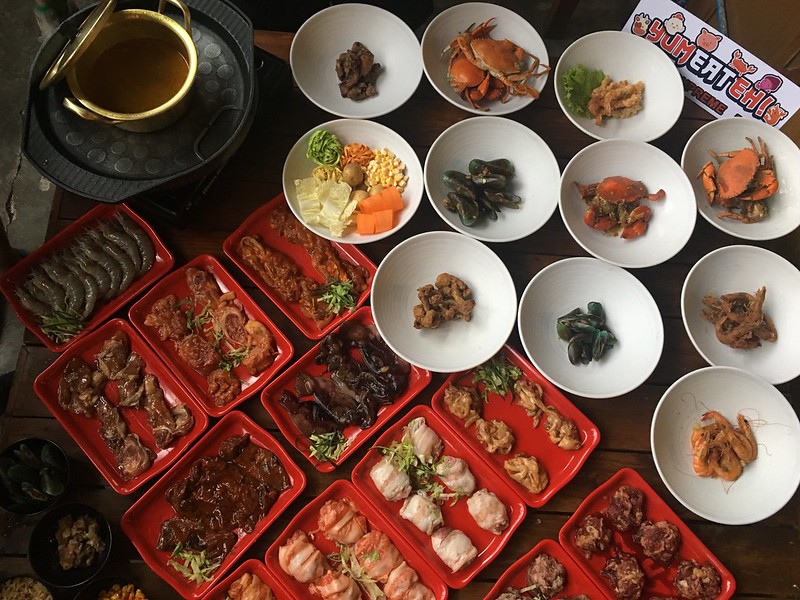 All these sets are guaranteed to satisfy your K-BBQ cravings! 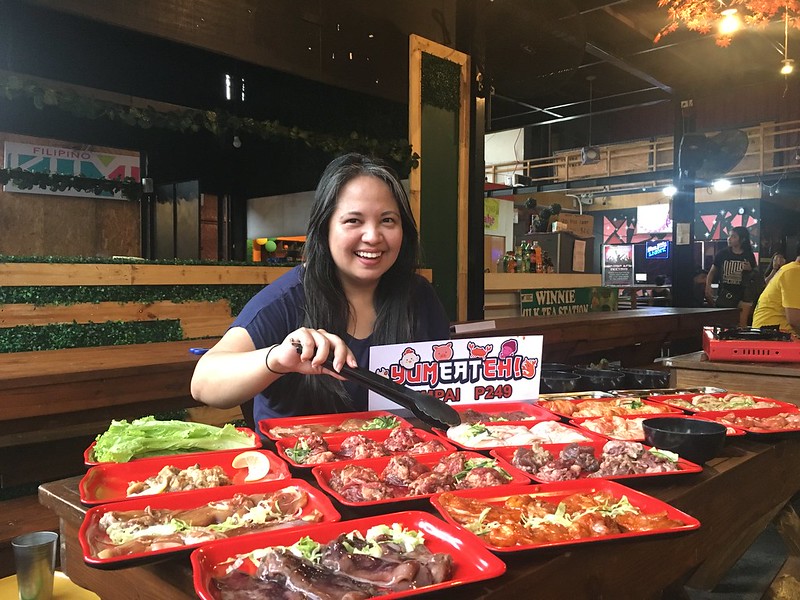 Celebrating your birthday soon? Take advantage of YumEaTeh!’s Bigger, Better Birthday Promo which give you discounts on your Sempai (Php249) and Hokage Supreme (Php499) meals within ten days of your birthday depending on the number of companions you bring to YumEaTeh!:

Thank you to Hungry Byaheros for extending the invitation, and to Eric Tan, JM Alcantara and the staff of YumEaTeh! for having us.

Disclosure: Together with my fellow foodies, I was invited to join a foodie meetup held here. Food items mentioned here were served to allow us to sample the fare and were not paid for by the attendees, including myself.

Let’s face it: the Pinoys’ love affair with all things Korean will not be going away anytime soon. (And, truth be told: do we want it to?).

Case in point: the proliferation of restaurants offering unli Korean barbecues all over the metro.

One such eatery is Saram Korean BBQ Grill Buffet. Located along V. Luna Extension in Quezon City, it provides unlimited meats for grilling as well as a wide array of banchan (small side dishes) that you can munch on while cooking or can add to the lettuce wrap along with your grilled meats for added flavor and texture. 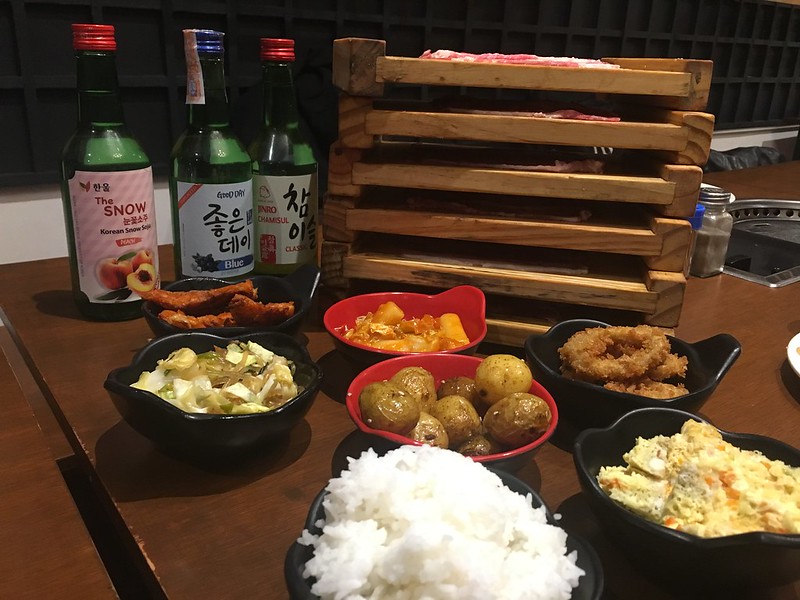 Here’s what you can expect to enjoy at Saram:

Banchan:
Kimchi – fermented vegetables; no self-respecting Korean resto will find itself lacking this dish
Namul – steamed, marinated or stir-fried vegetables usually seasoned with minced garlic, sesame oil, vinegar, chopped green onions or dried chili peppers; my favorite among these are the Sigeumchi Namul (spinach) and the Kongnamul (bean sprouts)
Gyeran-jjim – mixed and season eggs steamed in a hot pot; already great by itself but do try adding a bit to your meat lettuce wrap. I’m sure you’ll love it!
Pajeon – thin and slightly soicy pan-fried pancakes flavored with scallions
Japchae – Korean glass noodles sauteed in a slightly sweet garlic sauce along with chopped vegetables

(You can get all the banchan you want from the buffet table, while the meats will be served at your table upon request.) 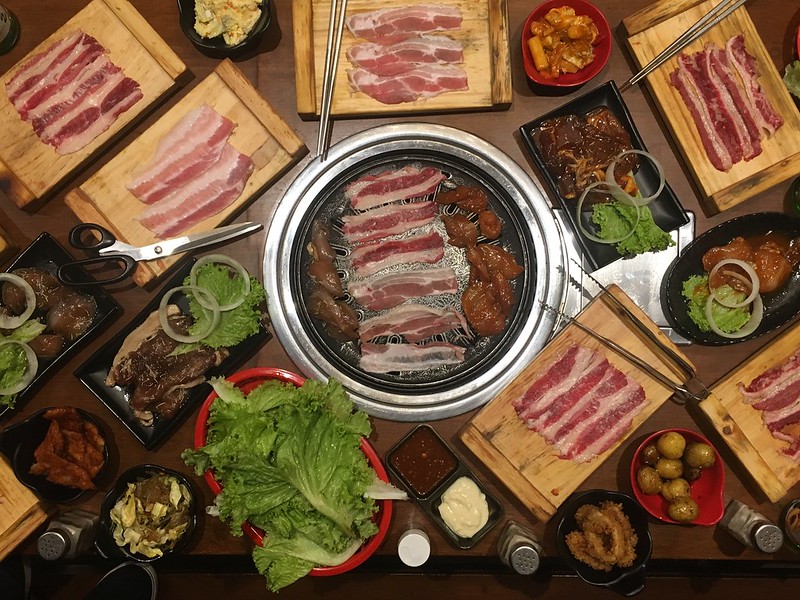 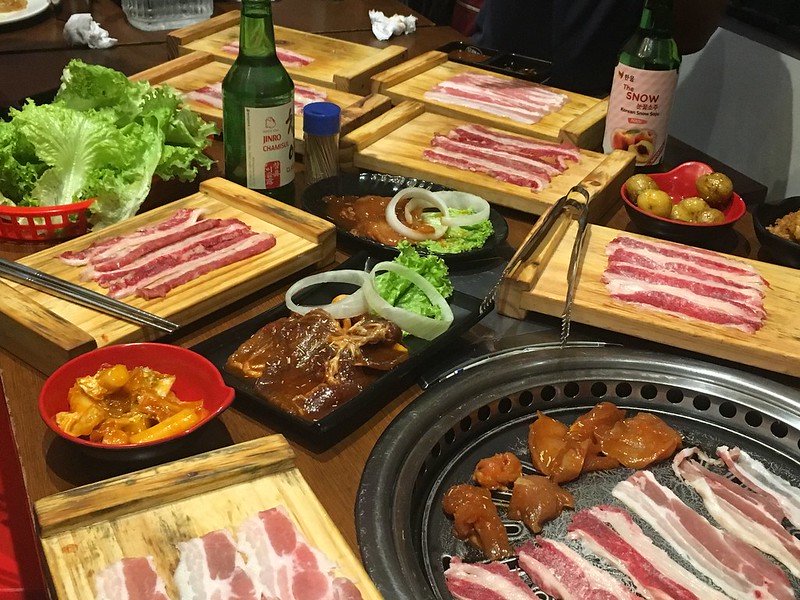 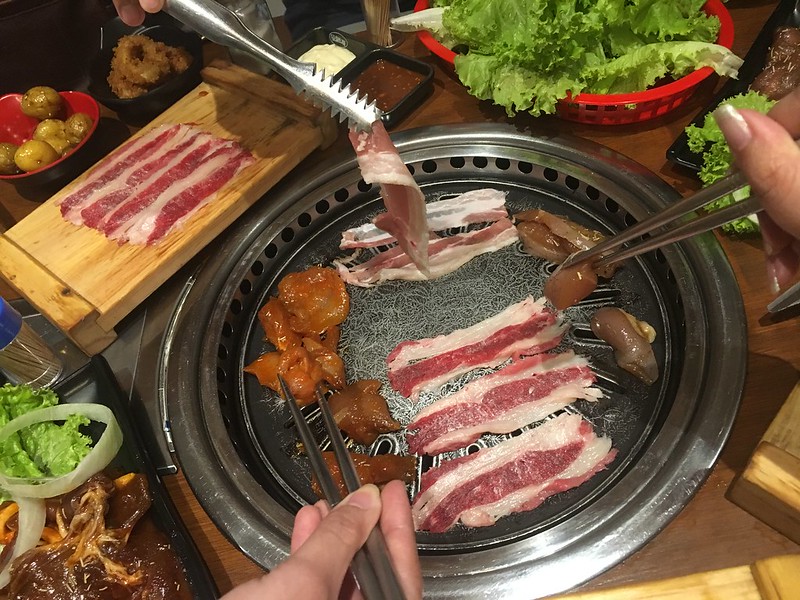 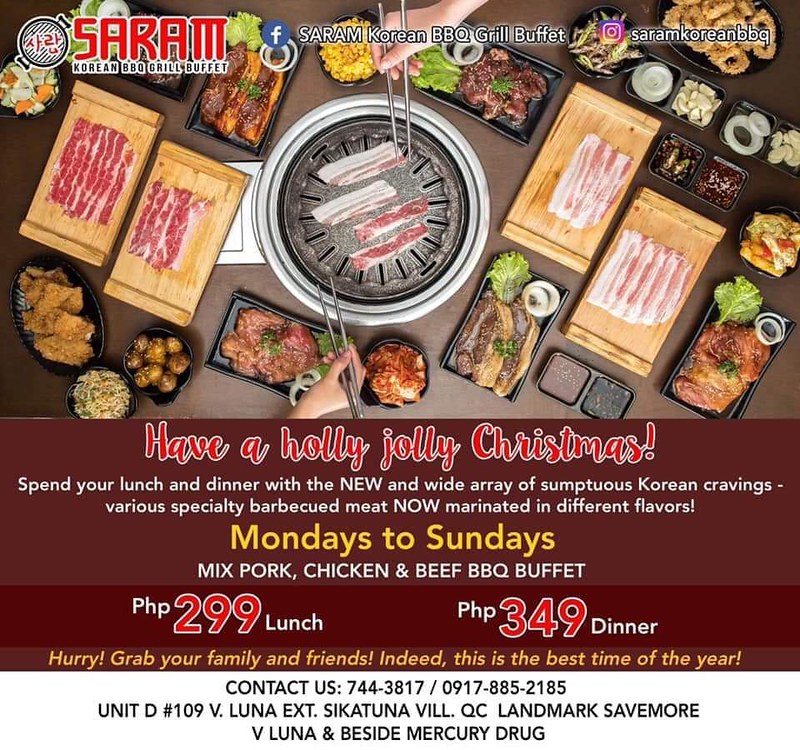 Check out the options available:

Set A: unlimited plain meats at Php249/head for lunch and Php299/head for dinner

Set B: unlimited plain and flavored meats at Php299/head for lunch and Php349/head for dinner

So if you find yourself in Sikatuna Village and want to satisfy your Korean food cravings, head on to Saram.

Ever since the extended family discovered the wonders of Korean cuisine that Tagaytay has to offer several years ago, a sojourn here is hardly complete without a meal at a Korean restaurant.

One such eatery is Neul Bolm Korean Restaurant which has moved to a new location since our last visit.  (Incidentally, it is tagged on Zomato as “Permanently Closed” but as confirmed by the wait staff and this review, it is still very much in operation.)

The new location is just as spacious as their previous one with a cleaner and more modern aesthetic.  It has long wooden tables with built-in grills for the Korean barbecue; two tables side-by-side was able to comfortably accommodate our party of ten. 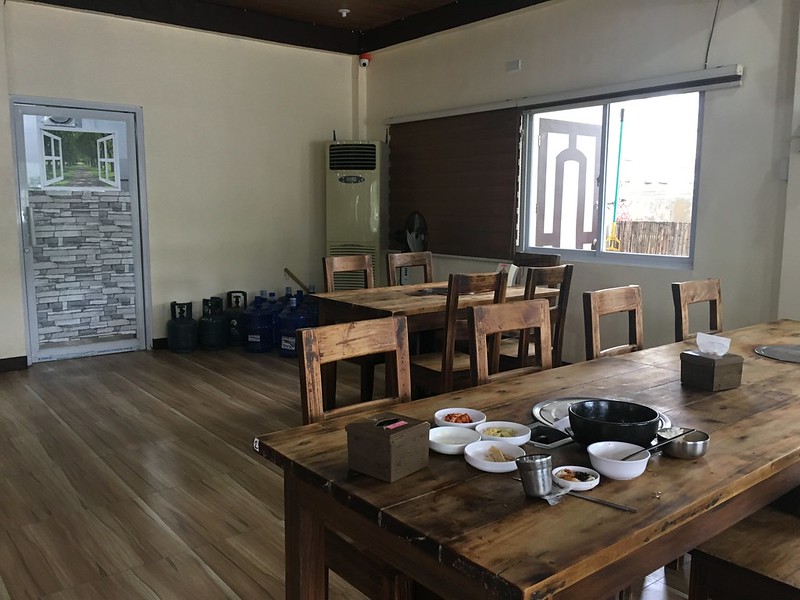 We ordered Ssambap, meats to be grilled right on our tabletop and served with green leafy vegetables, a few slices of garlic, sesame oil and some ssamjang or red bean paste sauce. These include: 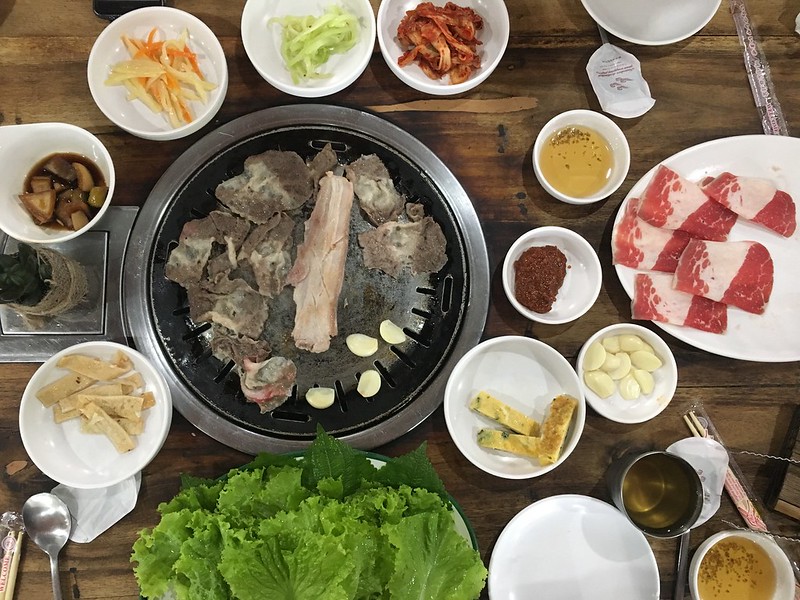 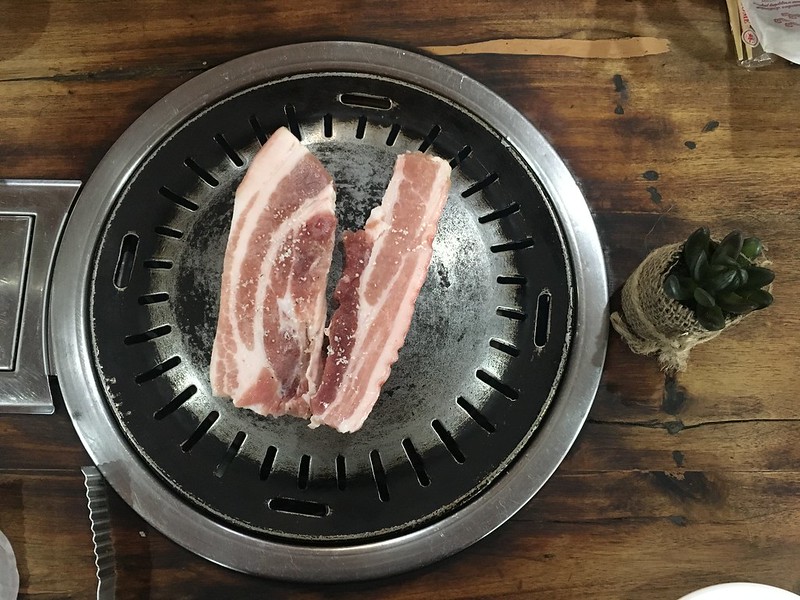 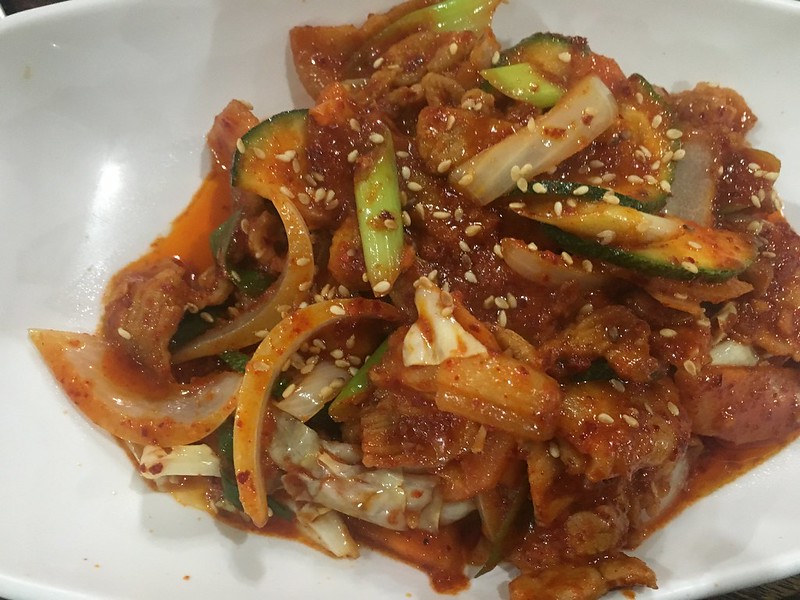 These were accompanied by generous and refillable servings of banchan, side dishes such as sliced fish cakes, rolled omelettes, kimchi and more.  Many of these have some acid or vinegar elements which help cut through the richness of the grilled meats. 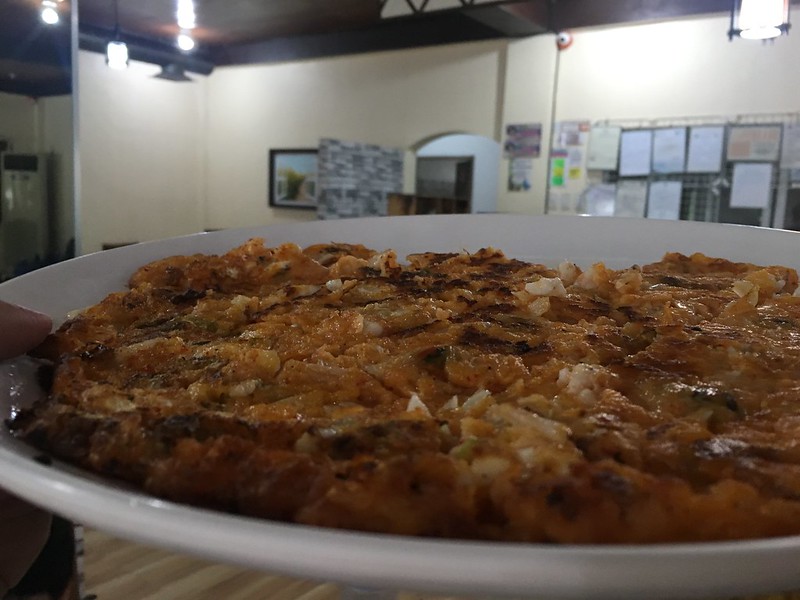 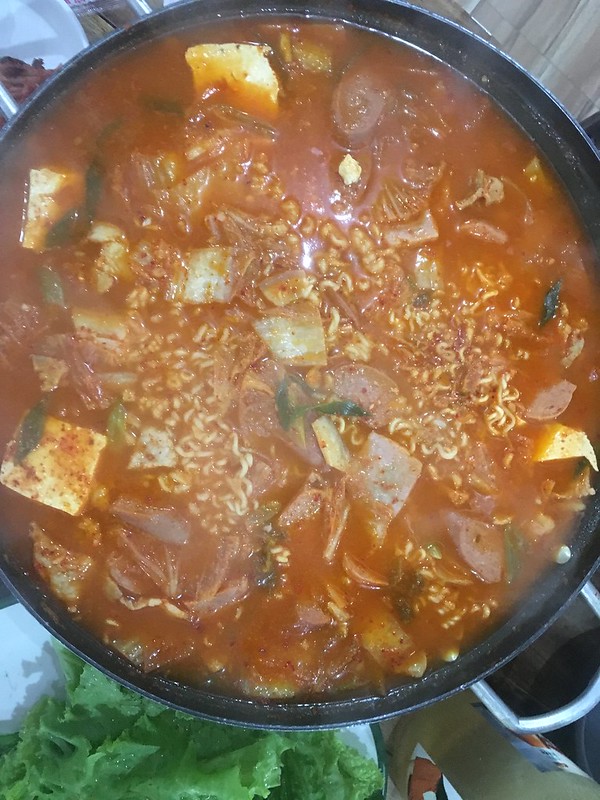 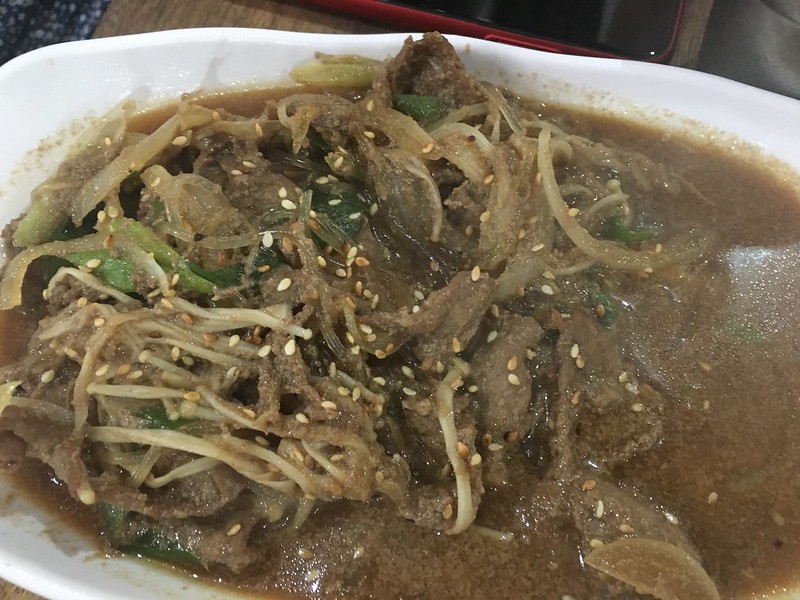 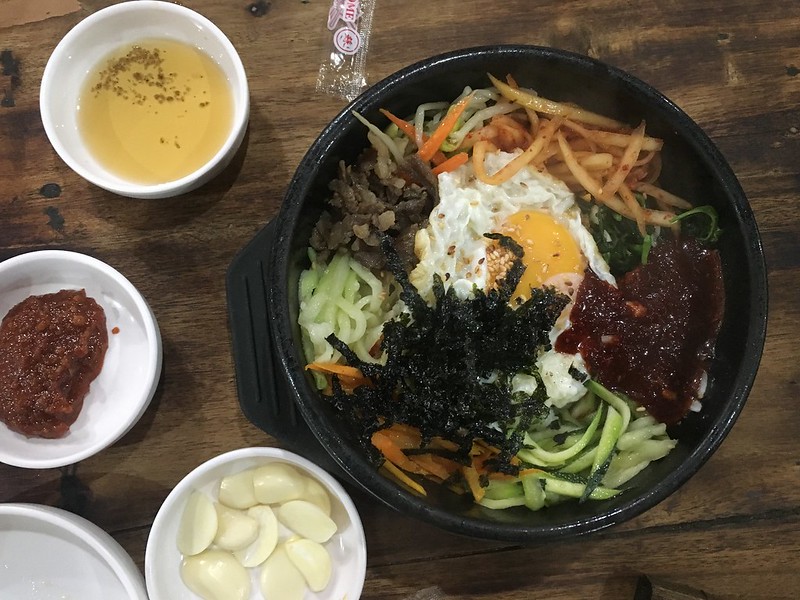 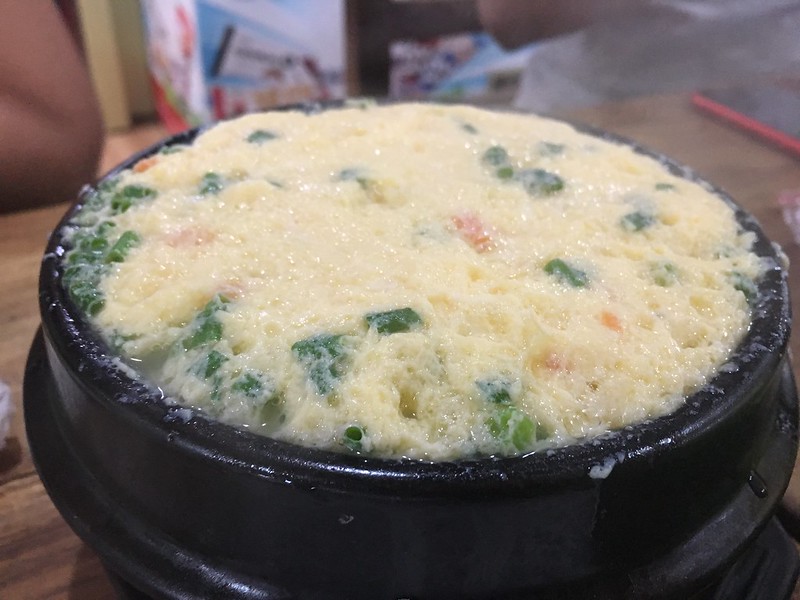 After the meal, the kids were also able to enjoy several assortments of Korean ice cream which are also offered by the restaurant

Neul Bolm Korean Restaurant is located along the Tagaytay-Nasugbu Highway near Sky Ranch.  For queries and reservations, call +63 46 413 1536.

Why not try your hand at cooking Korean food at home?  Check out these recipe books on Amazon.com!

Want to try some recipes today? There’s no need to leave home to shop for ingredients.  With Honestbee, just order your groceries online and you’ll get them delivered right at your doorstep at your preferred time. Use this referral link and get Php500 off for a minimum spend of Php2,500.  You can download the Honestbee app on iTunes or Google Play.

My love for Korean food is well-documented in this blog and in my social media accounts.  This love has only been further stoked when, urged by my husband and daughter who are both K-drama fanatics, I started watching Goblin.  Everytime I see Gong Yoo, Lee Dong Wook and Kim Go-Eun either wolfing down or sedately eating samgyeopsals or ramyuns, I would find myself near to salivating.

I was happy to discover this Korean chicken-and-beer joint located at SM Megamall during a recent Zomato Foodie Meetup.

Named after the upscale district in Seoul made famous by Psy’s earworm of a song, the place had a lively and informal vibe, with playfully designed interiors (check out those rubber chickens!) and K-pop music videos playing in the background (yes, including songs from Goblin OST). Gangnam Wings is well-suited to the after-office crowd who will be craving for their chimaeks (chicken and beer) after a day’s work.

This resto is well-known for its authentic Korean fried chicken: crispy skin and tender juicy meat enhanced by distinct sauce coatings. Even its dishes have that playful vibe with its most popular orders named (not surprisingly) after famous Korean dramas: Goblin Wings (Php280 for half dozen pieces), which is a combo of three sauces – the Original Crispy, Garlic Soya, and the Sweet and Spicy – Php280; and Descendants of the Chicken (Php548 for ten pieces), which consist of any 2 combinations of sauces from Korean Buffalo, Korean Barbecue, Honey Garlic, Soya Yogurt and Spicy Asian.  These sauces indeed have distinct flavors but, surprisingly, I liked them all, even the Korean Buffalo which was quite spicy.

I would recommend pairing the chicken with Beef Bulgogi Fries (Php298).  These consist of thick fried potato wedges topped with beef bulgogi bits, aromatic herbs and a special mayonnaise.

A surprising piece de resistance is the Ginseng Chicken (sorry, I didn’t get the price :-)).  A whole spring chicken is boiled, together with herbs and seasonings, for an hour with rice inside, such that the rice cooks while inside the chicken.  The closest it comes to texture and flavor is the arroz caldo but with significantly less rice and a lot more falling-off-the-bone chicken.

For dessert, we had Rockmelon Bingsu (Php280), shaved ice with melon balls served in the melon shell and topped with a big dollop of vanilla ice cream.  I can imagine myself eating this with my kids to ward off the summer heat in the near future.

I also sampled two of its Sojuritas (soju cocktails): the Watermelon Soju (Php688)and the Yakult Soju (Php248).  Both were refreshing drinks with a little kick but I had to stop myself at two shots apiece as I still had to drive myself home.  (By the way, I much preferred the tangy sweetness of the Yakult Soju, but then again, I was never a big fan of watermelon anyway.)

Currently, all of these Korean barbecue sets will be composed of unmarinated meats but marinated variants are being considered for future offerings.

A concern that was raised was the absence of exhaust pipes to suck out the smoke from the cooking meats on the dining tables.  Surely, the lunch crowd will not appreciate smelling like inihaw when they get back to their offices after their meal break.  Owner Rinky Tuano assured us that this concern has been considered and will be addressed by air conditioning and the exhaust in the kitchen.

At the request of Gangnam Wings, this post was updated to reflect the new pricing of the Samgyeopsal Sets.